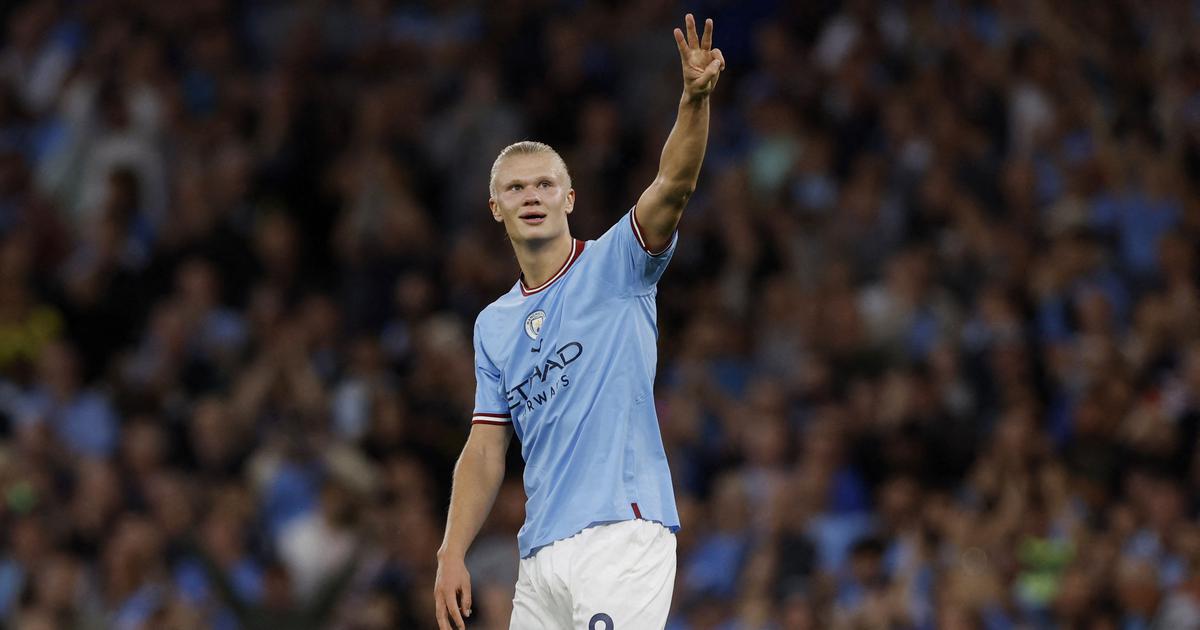 Erling Haaland hit a second successive hat-trick as Manchester City crushed Nottingham Forest 6-0, while leaders Arsenal extended their perfect start to the Premier League season with a 2-1 win against Aston Villa on Wednesday.

City and Arsenal have set the early pace, but Liverpool are gathering momentum after snatching a last-gasp 2-1 victory against Newcastle.

Haaland has made a blistering start since his £50 million ($58 million) move from Borussia Dortmund in the close-season and the Norway striker’s latest goal spree set a Premier League record.

Haaland’s tally of nine goals after his first five appearances is a new high in the Premier League era, beating the previous mark of eight set by City great Sergio Aguero and Micky Quinn.

“I know he’s happy scoring goals, but I think what he wants is to win. The records are OK, but I’m pretty sure he would not like it if we did not win,” Guardiola said of Haaland.

“He is a special talent. He smells the box like no one else, his first touch of the game is a goal. That’s Erling.”

City went ahead in the 12th minute when Phil Foden’s cross reached Haaland, who poked home from close range.

Haaland, whose father Alfie played for Forest between 1993 and 1997, struck again from close range in the 23rd minute and sealed his treble eight minutes later with a header from virtually on the goal-line.

Even with Kevin De Bruyne starting on the bench, the champions were unstoppable and Joao Cancelo curled into the top corner from 20 yards in the 50th minute.

Argentine forward Julian Alvarez celebrated his first Premier League start following his move from River Plate with a brace to seal City’s biggest win since a 7-0 rout of Leeds in December.

City are two points behind Arsenal after Mikel Arteta’s side once again showed a tenacity so often missing from Gunners teams in recent seasons.

Arsenal struck in the 30th minute thanks to a gift from their former keeper Emiliano Martinez, who pushed a tame Gabriel Martinelli cross straight to Gabriel Jesus for a simple finish.

Second-bottom Villa were level when Douglas Luiz’s corner flew straight past Arsenal keeper Aaron Ramsdale in the 74th minute despite the hosts’ appeal for a foul.

But Arsenal, who came from behind to beat Fulham on Saturday, responded impressively as Martinelli restored their lead three minutes later from Bukayo Saka’s cross.

“The first half was probably one of the best we have played, then we conceded a goal and it’s game on. But the team again reacted incredibly well,” Arteta said.

Villa boss Steven Gerrard, jeered off after losing at home to West Ham on Sunday, will come under renewed pressure following his side’s fourth defeat in five games this season.

Asked if he worried about his future, Gerrard said: “Of course I do. I am really honest and critical of myself.”

At Anfield, Liverpool left it late to secure a second win this season as Fabio Carvalho’s 98th-minute goal saw off Newcastle.

Away striker Alexander Isak rocked Liverpool in the 38th minute of his debut following his £60 million move from Real Sociedad, netting with a composed finish from Sean Longstaff’s pass.

But, building on the momentum from Saturday’s 9-0 rout of Bournemouth – which equalled the record for the Premier League’s biggest win – Liverpool equalised when Roberto Firmino slotted in Mohamed Salah’s 61st-minute pass.

And, well past the original five minutes of stoppage time, Carvalho – a day after his 20th birthday – fired home to spark wild celebrations.

“The perfect moment to win because it was a difficult game. What a wonderful goal from the birthday kid. It’s massive. We will remember it for years,” Liverpool boss Jurgen Klopp said.

Third-placed Tottenham had to settle for a 1-1 draw at West Ham, with an own goal from Hammers defender Thilo Kehrer cancelled out by Tomas Soucek’s leveller.

Managerless Bournemouth drew 0-0 with Wolves at Dean Court in their first game following Scott Parker’s sacking after the humiliation at Liverpool.