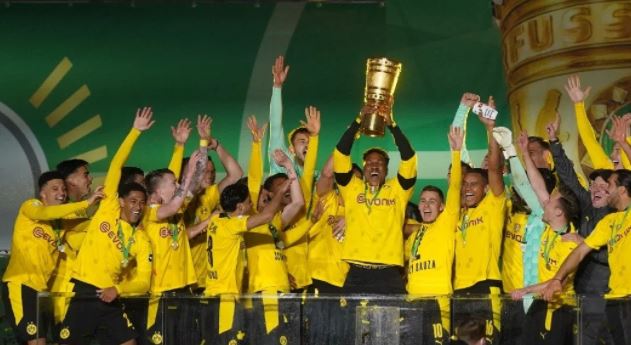 Berlin: Erling Haaland and Jadon Sancho scored a brace each as Borussia Dortmund beat RB Leipzig 4-1 in the German Cup final for their fifth title in the event.

Sancho opened the scoring in the fifth and netted again on the stroke of half-time on Thursday, DPA reported.

Haaland got the second and a late fourth in his return from injury on a wet night behind closed doors in Berlin’s Olympic Stadium.

Dortmund’s young and talented team of coach Edin Terzic claimed their first Cup title since 2017 in their 10th final to somewhat salvage a season that saw them fail to challenge Bayern Munich for the Bundesliga title but at least close to a top four finish for a place in the next Champions League after some strong past weeks.

Leipzig and their Munich-bound coach Julian Nagelsmann failed to win a first title of any kind, with Leipzig having also lost the 2019 Cup final against Munich. Their 71st-minute goal from Dani Olmo was not enough on the night.

They continued their poor record against Dortmund who have not lost against the eastern Germans in eight games and beat them 3-2 in the Bundesliga on Saturday.

“Unbelievable how we played today. We fought our way back over the past weeks. Compliments to the team,” Dortmund captain Marco Reus told public broadcasters ARD.

“We are capable of special things when we need them. The first half half was excellent, the second not so good, but we have the Cup.”

Leipzig forward Yussuf Poulsen said: “They scored three goals from three chances. We didn’t defend good enough when it mattered. And they have quality players.

“You don’t deserve to win when you trail 3-0. We had big chances but didn’t manage to score.”

Sancho scored a late winner on Saturday, and the England forward was on target again five minutes into Thursday’s final when he curled into the right corner in an attack initiated by Reus who stole the ball from Kevin Kampl.

Leipzig lost the ball again in midfield in the 28th, Reus fed Haaland who kept possession against Dayot Upamecano who eventually fell, allowing Haaland the space to slot past Peter Gulacsi into the far left corner.

And it was 3-0 on the stroke of half-time when Sancho’s tap-in off Reus stood after an initial offside call was nullified by the video assistant referee.

Leipzig had managed to fight from two down to a temporary 2-2 in Saturday’s game, and they attacked with might again this time around after intermission, with substitutes Christopher Nkunku and Emil Forsberg hitting the top of the bar and left post, respectively.

Olmo eventually gave Leipzig hope by smashing into the top left corner from the edge of the area in the 71st but Haaland wrapped up matters in the 88th on the counter, with a little luck because his attempted left-footer hit his own right foot to go in.