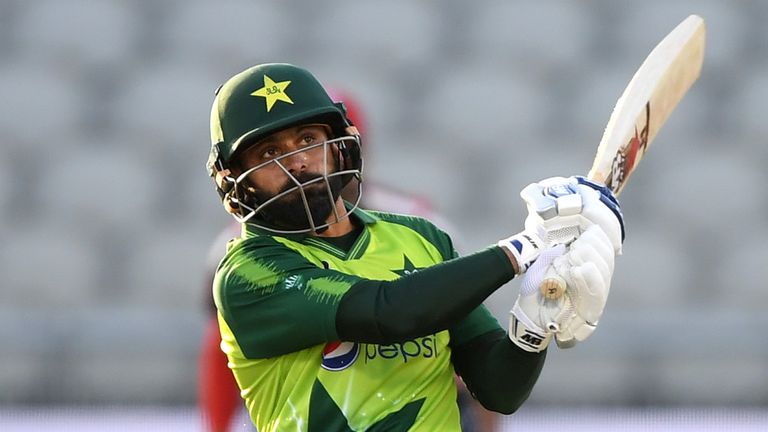 Manchester: Pakistan batsman Mohammad Hafeez hit a scintillating unbeaten 86 as the visitors beat England by five runs in the third and final Twenty20 International at Old Trafford to tie the series 1-1.

Batting first, Pakistan posted 190 for four in their 20 overs as Hafeez and debutant Haider Ali (54) shared a hundred runs partnership for the third wicket on Tuesday. England could only manage to reach 185 for eight despite a superb 61 from Moeen Ali.

In his brilliant inning, Hafeez smashed six sixes in his 52-ball 86. Haider also became the first Pakistan player to score a Twenty20 half-century on debut when he brought up his milestone from 28 deliveries and his century stand with Hafeez came off 10 overs.

Chasing a tough total, England were in early trouble when opener Jonny Bairstow was bowled by Shaheen Afridi (2-28) for a duck. Captain Eoin Morgan was run out for 10 as partner Tom Banton refused a run, and when the latter was leg before wicket to Haris Rauf for 46 from 31 deliveries, England were teetering at 69 for four.

Moeen and Sam Billings (26) put on 57 for the fifth wicket, and the former kept his side in the game with some power hitting, leaving them needing 20 from the last two overs. But a brilliant penultimate over from seamer Wahab Riaz (2-26) went for just three runs, including the wicket of Moeen, who scored 61 off 33 balls.

The hosts will now prepare for a three-match Twenty20 series against Australia that starts in Southampton on Friday.

Players like Kohli to struggle in empty stadium: Paddy Upton