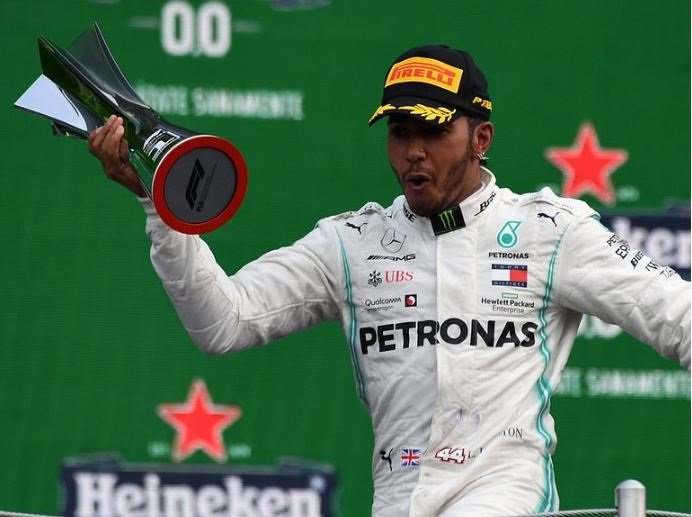 Mexico City: Lewis Hamilton drove to a near-flawless victory, but not yet a sixth drivers’ world championship when he claimed his 10th win of the season for Mercedes at the Mexican Grand Prix.

The defending five-time title-winner produced the measured drive of a champion-elect to claim a well-judged triumph ahead of Ferrari’s Sebastian Vettel and his Mercedes team-mate Valtteri Bottas who kept his own title bid alive for another week by finishing third.

Charles Leclerc, who started on pole position in the second Ferrari, finished fourth ahead of Red Bull’s Alex Albon and Max Verstappen, who stormed through the field after an early pit stop, and local hero Sergio Perez of Racing Point.

Daniel Ricciardo came home eighth for Renault ahead of the two Toro Rossos of Pierre Gasly and Nico Hulkenberg in the second Renault.

Hamilton’s victory was only his second since Formula One’s European summer break in August, his second in Mexico and the 83rd of his career, but it was also Mercedes’ 100th victory in Formula One and extended his run points-scoring finishes to 30 races.

He now looks certain to clinch his sixth title at next weekend’s United States Grand Prix in Austin, Texas, where he will need just four points.

“That was for Bono!” said Hamilton on his slow-down lap in reference to his absent race engineer Peter Bonnington.

“Today’s an incredible result and I have to say thank you to our team. We came here on the back foot, but we pulled through.” After winning his last two titles in Mexico without even finishing on the podium, it was ironic for Hamilton to win but know he has to wait for a sixth coronation.

“I enjoyed it,” said Bottas, who survived a heavy crash in qualifying on Saturday.

“Considering what happened yesterday, it’s a good result… I don’t think we could have done much more.”

Hamilton added: “I don’t mind not winning the title here. I can wait. I just love racing and I am happy to take each race as it comes.” Four-time champion Vettel said: “It was a long race with no break, but I think Lewis was just cruising for most of his second sting. I’m happy, but we could have had a sharper strategy.”