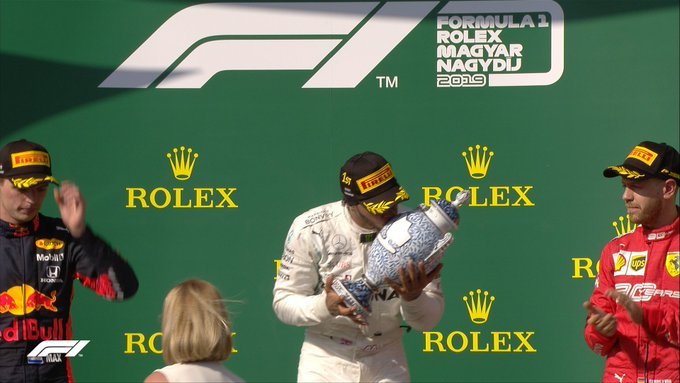 In an entertaining race, the leading two were in a class of their own all day, with Verstappen seizing the initiative from his maiden pole position and Hamilton settling into second place.

The Briton pushed hard after both drivers had made their pit stops, and briefly took the lead after the pair went wheel-to-wheel at turn four on lap 39, but ran wide on the corner exit and was obliged to give the position back to Verstappen.

Realizing that their man would be unlikely to overtake Verstappen on track, Mercedes elected to pit Hamilton for another set of new tyres on lap 48, in the hope that the fresh rubber would allow him to quickly close the gap to the Dutchman.

Shifting to a two-stop strategy worked a treat, with Hamilton not losing his second place and setting several lap records as he closed on Verstappen at over a second per lap, ultimately taking the race lead on lap 67 of 70 as the Red Bull’s badly worn tyres rendered the Dutchman defenseless.

Speaking after the race, Hamilton paid tribute to his team’s role in securing the victory. “I’m really grateful for the team for believing in me and always pushing to the limits and taking a chance. This wouldn’t be possible without the hard work of everyone at the factory. I was on the limit all the way. I didn’t know if I could overhaul a 19 second gap. It was like [doing] qualifying laps every lap.”

Despite losing the lead so late in the race, Verstappen was magnanimous in defeat. “We were not fast enough,” the Dutchman lamented.

“We tried everything, but it was not enough, but I think it was a good weekend overall. Congratulations to Lewis. He was pushing me hard, and I like that.”

Behind the leading two, Sebastian Vettel took advantage of a similar strategy call to overtake teammate Charles Leclerc for third place, though Ferrari may be concerned at their lack of pace relative to the leading two, with their cars finishing over one minute adrift of Hamilton.

It was not a good day for Hamilton’s teammate Valtteri Bottas, who finished only eighth after having to pit for a new nosecone following contact early in the race, and suffered the ignominy of being lapped by his teammate.

After crashing out at the previous race in Germany, the Finn’s recent displays will do nothing to quieten the rumors that Mercedes are set to replace him with Esteban Ocon for 2020. latest sports news headlines

A day to remember. Thank you to everyone in my team for their unwavering support throughout these 7 years. Here we had our first win together in 2013 and today we did it again. To #teamLH I love you guys, so grateful for the constant unconditional love #grateful 🙏🏾 pic.twitter.com/KmzCpigv3x

Having failed to register a top-three finish so far this season, the Frenchman is another whose drive is reported to be under threat. latest sports news headlines

Hamilton’s win sees him extend his championship lead to 250 points, with Bottas second on 188 and Verstappen close behind on 181. latest sports news headlines

In the constructor’s standings, Mercedes remain out in front on 438, with Ferrari some way back with 288, and Red Bull on 244. latest sports news headlines

Following a four-week mid-season break, the 2019 Formula 1 season resumes on September 1 with the Belgian Grand Prix.