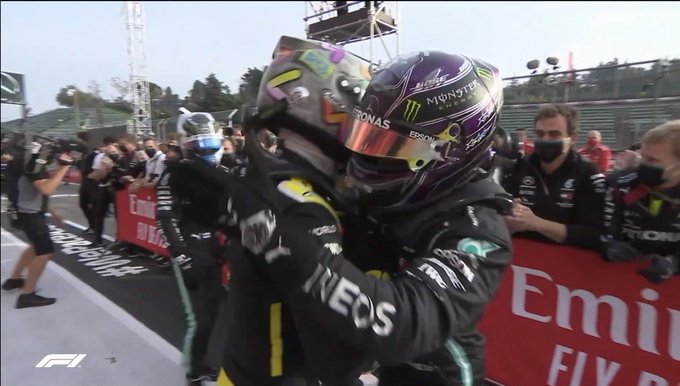 Bottas had enjoyed a strong start to the Imola race from pole position, leading into Turn 2 as Hamilton lost out to Verstappen on the run down to Tamburello on Lap 1 and moved to third.

But Mercedes’ decision to give Hamilton a long first stint paid dividends when Renault’s Esteban Ocon retired at the side of the track on Lap 29, the resultant Virtual Safety Car allowing Hamilton to pit from the lead – Bottas and Verstappen having boxed earlier in the race – and retain P1.

But with 12 laps to go, Verstappen’s retirement at Villeneuve led to a full Safety Car, setting up a breathless final few laps of the race, which ultimately saw Hamilton hold on to win out from Bottas, while Ricciardo secured his second podium of the season for Renault after holding off a late charge from AlphaTauri’s Daniil Kvyat, who finished a brilliant fourth as he fights for his F1 future.

Watch all the best bits from our return to Imola – where it was a race of highs and lows for Max Verstappen, and so much more ⬇️#ImolaGP 🇮🇹 #F1