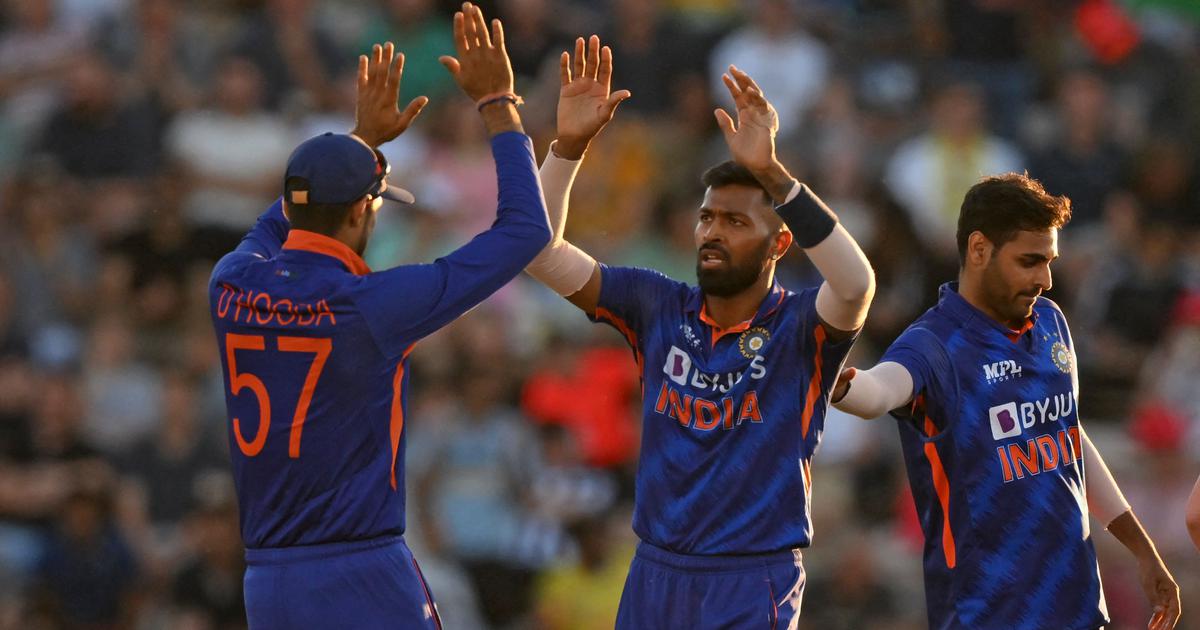 Southampton: Hardik Pandya reigned supreme with one of the finest all-round performances in recent times as India bossed England to emerge winners by 50 runs in the first T20 International here.

The swashbuckling all-rounder led India’s aggressive batting display with a blistering 33-ball 51, propelling the visitors to 198 for eight after they opted to bat first.

Hardik then finished with excellent figures of 4/33, destroying England’s batting with his full quota of four overs. He became only the fourth player from full member nations to score a fifty and take four wickets in a T20I match.

This was Hardik’s first T20I half-century, helping India score at a brisk pace in the middle overs after Rohit Sharma (24 off 14 balls), Deepak Hooda (33 0ff 17) and Suryakumar Yadav (39 off 19) set it up with their enterprising knocks.

Motoring along at 178 for five at the end of 17th over, India failed to finish their innings with a flourish on a belter of a pitch. But that did not matter in the end, despite India spilling a few catches.

Coming off his fine show with the bat, Hardik delivered with the ball in his very first over not once, but twice, removing Dawid Malan and Liam Livingstone to leave England in a disarray at 29 for three in the fifth over.

Hardik was not done yet as he ended Roy’s painstaking stay in the middle when he had the opener caught at third man after a thick edge. He capped off a memorable outing by taking the wicket of Sam Curran.

Earlier, seeking to make up for the lost time after missing the fifth Test against England owing to COVID-19, Rohit got India off to a brisk start.

First up, Rohit charged down the track to smash Sam Curran towards mid-off and while a diving Chris Jordan got a hand to it, the ball was hit too hard and all the fielder could do was deflect it to the fence.

Reece Topley strayed down the leg and Rohit whipped it off his pads for his second boundary. That was followed by another four as the India captain played it through point, forcing his English counterpart Jos Buttler to introduce spin as early as the third over.

Unperturbed, Rohit went after Moeen Ali straightaway and collected two boundaries off him by employing the sweep shots on both occasions.

However, the experienced off-spinning all-rounder came back strongly to dismiss the India skipper just when he was beginning to look ominous, with a delivery that drifted away for Rohit to snick it to Buttler.

Coming off his maiden century against Ireland, Deepak Hooda started from where he left off in the previous game at Malahide, smashing Moeen high over long-on for two massive sixes. That he opened his account with a maximum showed the kind of confidence that the man from Rohtak carried into Ageas Bowl.

And even though Moeen enjoyed his second breakthrough in the form of Ishan Kishan, who did not look to be in control of his pull shots, India continued with their attacking approach.

While Hooda started with a six, Suryakumar Yadav began his innings with a four, sweeping Moeen over backward square leg.

The man in form, Hooda continued to deal in boundaries, hitting Topley for three fours in the innings’ sixth over as India galloped to 66 for two in the powerplay.

Surya dispatched Tymal Mills over fine leg for a six, and then, comfortably got two fours on the off-side off Matt Parkinson’s innocuous leg-spinners.

Amid the flurry of boundaries, India lost Hooda — a rather soft dismissal — as he failed to connect to a Jordan delivery that was going down leg.

One big-hitter was replaced by another, as Hardik Pandya joined Suryakumar in the middle to continue the aggression.

In no time, Hardik started dealing in boundaries and even though Suryakumar got out, after getting a six and a four off Mills and Jordan respectively, there was no stopping India’s charge.

Hardik kept finding the fence with ease and a missed stumping off Parkinson, when the batter was on 37, compounded England’s woes. But they did manage to dismiss Hardik after he had got to his fifty.

With youngsters performing, pressure mounts on Kohli ahead of his T20 return