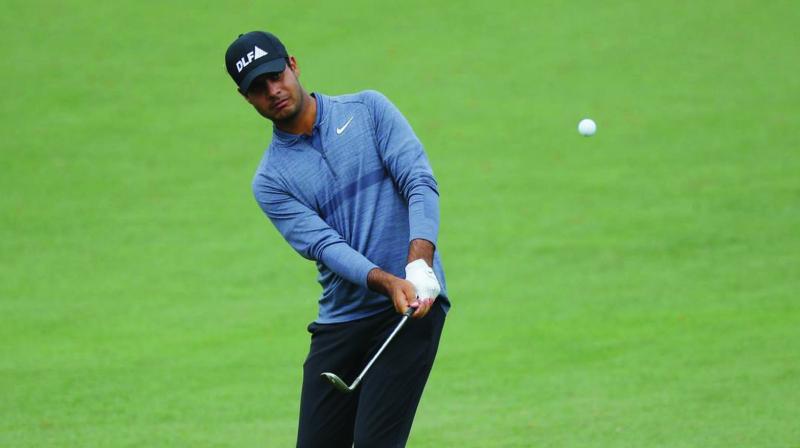 Birmingham: Indian golfer Shubhankar Sharma was fighting hard to make the cut as he rallied after being hit by a series of bogeys midway through the second round of the 2020 Hero Open here on Friday.

Starting the day at one-over 73, Shubhankar finished at three-over after 11 holes in the second round at the Forest of Arden Marriott Hotel & Country Club.

Shubhankar opened with a birdie on the first, but then bogeyed the fourth and sixth before he found another birdie on Par-3 eighth.

After that he had three bogeys in a row from ninth to 11th and endangered his chances of making the weekend rounds.

A birdie on the 12th followed by another on 13th brought him to one-over for the day and two-over for the tournament as the cut looked likely at one-under or lower.

Shubhankar had three bogeys and as many birdies in a six-hole run.

Sebastian Garcia Rodriguez retained his pole position as he moved to 13-under with a birdie-birdie finish and three-under 69 in the second round.

Alexander Bjork carded five-under 67 to be placed second at nine-under, where he Oliver Farr, who had played only six holes in the second round, and Sam Horsfield, who had played eight, for company.

Veteran Miguel Angel Jimenez, 56, playing his 707th European Tour, opened the second round from eight-under and at one time caught up with Garcia Rodriguez, who was yet to start.

But later he dipped to finish even par for the day, and at eight-under after 36 holes, he was very much in the mix and in the top-five. Also at eight-under for 36 holes were Alexander Levy (69) and Mikko Korhonnen (69).