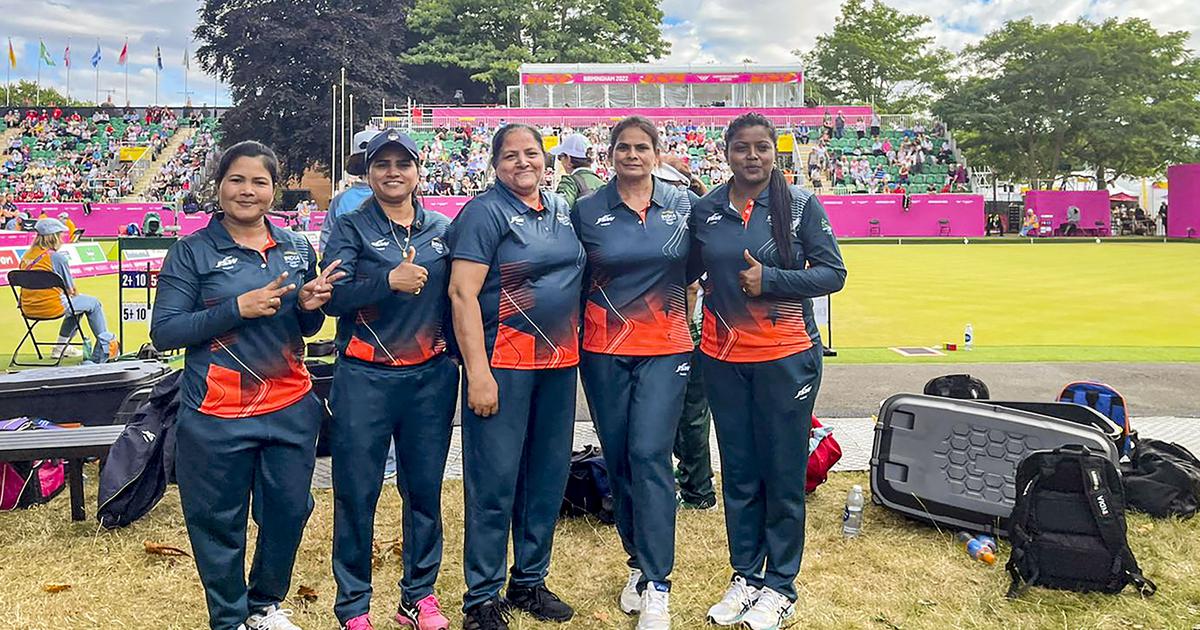 Birmingham: The Indian women lawn bowls team bagged a historic gold medal at the Commonwealth Games on Tuesday, an unheralded quartet pulling the sport from obscurity to limelight with its inspiring show.

The team had got the nation hooked to the sport after its surprise win over New Zealand, and its incredible campaign culminated in the best possible manner.

This is India’s fourth gold and first outside the weightlifting arena in this edition.

The Indian team led 8-2 at one stage but the South African side comprising Thabelo Muvhango (lead), Bridget Calitz (second), Esme Kruger (third) and Johanna Snyman (skip) made it 8-8 to spice up the contest.

The Indians though kept their nerves to pull away in the last three rounds.

All four athletes hail from different backgrounds. Pinki was a cricketer from Delhi, and Assam’s Nayanmoni Saikia was a national-level weightlifter in the early 2000s. Jharkhand’s Lovely Choubey was once a long jump athlete, and Rupa Rani Tirkey was a kabaddi player in the past.

The ‘leader’ of the pack, Lovely is a constable with Jharkhand Police while Rupa, who too is from Ranchi, works in the sports department.

Pinki is a sports teacher with DPS R K Puram in New Delhi while Nayanmoni comes from a farming family in Assam and works in the state’s forest department.

The players would now expect that the gold medal-winning performance will “open the doors” for further progress of the game.

Lovely, who will turn 42 on Wednesday, said the success in Birmingham will go a long way in raising the profile of the sport.

“We wanted to do something not only just for this team but for India. We knew that without medal doors will remain shut. Now doors have opened. I thank media, our federation, IOA, our manager Anju madam for support,” Lovely said.

“Anju madam gave us the freedom to select our shots, and make decisions. It made it easy for us,” she added.

“The hard work has finally paid off today, we have created history. We knew that gold medal will create more impact, so we are happy.”

Nayanmoni Saikia said the team did not lose heart after the South Africans staged a comeback to make it 8-8.

“The skip (Rupa) told us we can do it because we are a good team. We should not lose focus and enthusiasm, it will be done,” said Saikia.

“We were losing from very close. I have been with this team since 2010 Games. The margins of defeats were not much in previous editions. We were losing by one point and that was not letting us sleep. We were determined to do something this time. We have created history and this is the luckiest (best) day in Indian lawn bowls history,” she said.

Sports officer Rupa felt it is a life-changing achievement.

“We had won medals in Asia Pacific and Asian Championships in between but we had to win this medal in CWG to attract everyone’s attention. We came into the Games with a lot determination,” she said.

Asked what the team was thinking after making the final, Rupa said, “We were brimming with confidence.”

“We wanted to carry the momentum and go into the game with a lot of passion and determination. We could not sleep properly thinking about what would happen tomorrow. There was tension. But I thought it was a new day, new beginning and wanted to make it count,” she said.

Pinki said they prepared better for these Games.

“I meditated and we were focused on finishing the event. We did not want to get excited. The confidence that we got yesterday we have been able to change the colour of the medal. We want to get medals in other events too, in CWG,” she said.