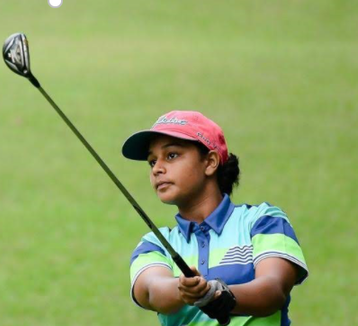 She led by three shots over the far more experienced Ridhima Dilawari, who made amends for her none-too-happy opening round with the day’s best card of three-under 69.

There were as many as five players in tied second and apart from Ridhima the bunch included first round leader, Jahanvi Bakshi (75), the elder sister of Hitaashee. The other four are last week’s runner-up Pranavi Urs (72), emerging talent Oviya Reddi (71) and amateur Avani Prashanth (72).

Vani Kapoor (72) was seventh, while Amandeep Drall (72) was eighth and Seher Atwal (72) occupied the ninth spot.

Three players amateur Sneha Singh, Ananya Datar and Khushi Khanijau were tied for 10th, while Neha Tripathi (78), who was second after the first round, slipped to T-13.

Hitaashee, who is just 16 years of age, won the last leg of the Hero Tour in 2020 in only her second start as a pro. In the second round here in Chennai she birdied the sixth and 13th and parred the remaining 16 holes for a superb 70.

Jahanvi, who is 20 months older than Hitaashee, had a rough front nine. Although she had a birdie on first, she bogeyed third, seventh and ninth, double bogeyed the sixth and turned in four-over 39. On the back nine she birdied twice and did not drop any shots to finish with 75.

Oviya, who has been making a lot of birdies, had three more and an eagle too. She also dropped four bogeys to end up with an even par round.

Pranavi Urs had two birdies on front nine and two bogeys on back nine for her 72, while amateur Avani had four birdies against as many bogeys.