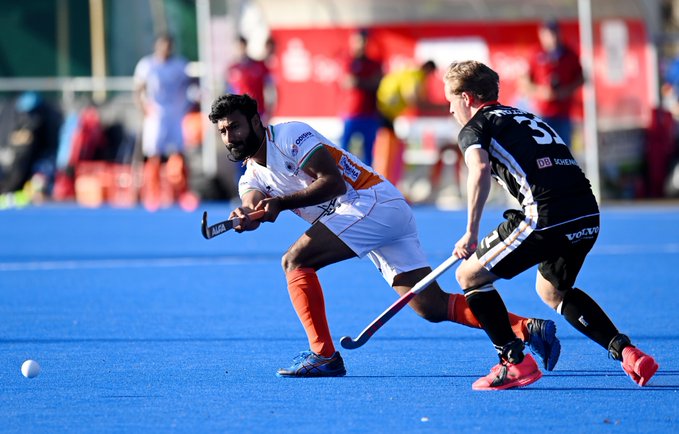 Krefeld (Germany): Indian men’s hockey team’s second of their four-match tour of Europe ended in a 1-1 draw with both the teams living up to their billing on Tuesday.

Jarmanpreet Singh of India opened the score board for India in the fourth minute while Martin Häner scored for Germany.

Riding high on confidence after a dominating 6-1 win in their first international match of 2021, the world No.4 India started on an attacking note against host Germany and earned a penalty corner in the fourth minute, which was converted by defender Jarmanpreet Singh with a classic slap shot.

Within the following two minutes, the hosts also bounced back and got their chance to score an equaliser with a penalty corner but could not capitalise.

The visitors continued to dominant in the second quarter, with better ball possession, creating potential opportunities with intent to capitalise on the early lead. However, the quarter ended with the hosts putting pressure on the Indian men with strong man-to-man tackle.

The hosts backed their tactical play with some quick forays into the striking circle, resulting in them earning back-to-back penalty corners. It was in their second attempt when the experienced Martin Häner levelled the score 1-1 minutes ahead of the half-time break.

Continuing the momentum, the third quarter saw Germany keeping the ball in the Indian half to create scoring opportunities but, Indian defenders remained composed and set-up a well-structured defence that kept the German forward line from converting. A solid block from Surender Kumar at the very last minute saw the third quarter ending in a 1-1 stalemate.

The final quarter saw some nail-biting moments, with both the teams upping the ante but neither allowed a goal with the match ending in a 1-1 deadlock.

“This match was a good experience for our players. It was a tough match and the team worked hard. Both teams created opportunities and I believe we will learn a lot from this game,” said India’s chief coach Graham Reid.

India will next play Great Britain on Saturday.