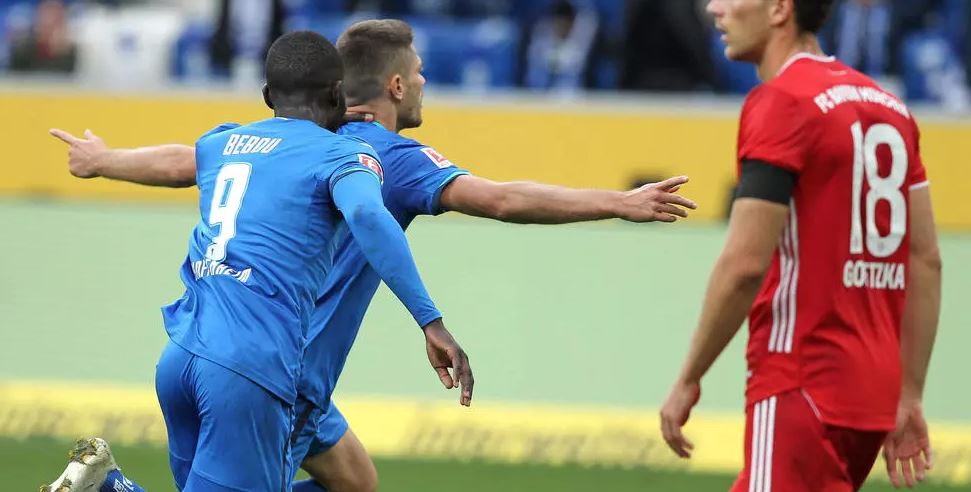 Berlin: Andrej Kramaric scored twice as Hoffenheim defeated Bayern Munich 4-1 in the final match of the Bundesliga second round to end defending champions’ 23-game winning run in an emphatic fashion.

On Sunday, Bayern named Robert Lewandowski on the bench after claiming the UEFA Super Cup, thanks to an extra-time win over Sevilla in Budapest. With a full week’s rest behind them, Hoffenheim took full advantage in the game.

Christoph Baumgartner had already fired off a warning shot when Ermin Bicakcic powered a header from Dennis Geiger’s corner past Manuel Neuer in the 16th minute. The home side doubled up soon after when Kramaric drove over halfway and played a pass, via the boot of Benjamin Pavard, into the path of Munas Dabbur eight minutes later.

Bayern the reduced the arrears courtesy of Joshua Kimmich’s unstoppable curling strike, but were fortunate not to fall further behind as Jerome Boateng denied Dabbur at close quarters and Neuer pushed a Kramaric rocket onto the crossbar.
After the restart, both sides traded attacks as Dabbur pulled over the target from a promising position before Joshua Zirkzee rattled the woodwork from a tight angle on the hour mark.

Bayern coach Hansi Flick turned to Lewandowski and Leon Goretzka in a bid to avert a first competitive defeat since December but the goals were scored at the other end of the pitch Kramaric scored the third goal for Hoffenheim in the 77th minute.

Things went from bad to worse as Neuer felled Bebou inside the box to concede a penalty in the closing period. Kramaric stepped up to sew up the 4-1 victory on home soil in the stoppage time.

With the result, Hoffenheim capture the top spot with two wins from two games whereas Munich slip to the seventh position after suffering their first loss in 2020.