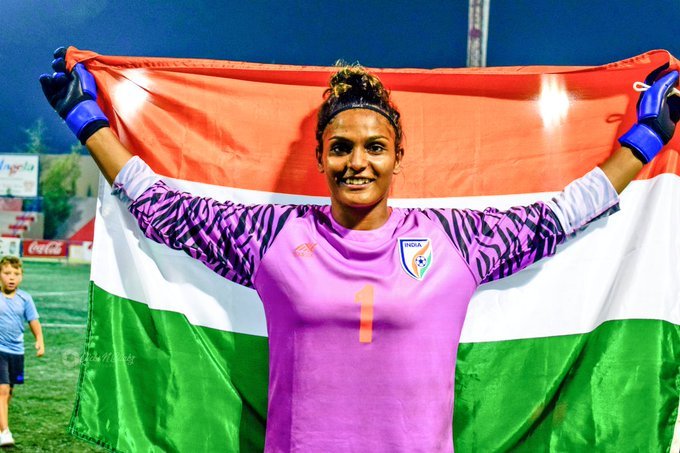 New Delhi: Indian women’s football team star Aditi Chauhan believes the upcoming 2020  FIFA U-17 Women’s World Cup, which will be hosted by India, will be an eyeopener for women’s football in the country.

The goalkeeper also hoped that the tournament would provide a boost to people’s interest in women’s football.

“I am hopeful that upcoming U-17 women’s world cup would witness a high level of zeal and excitement and will also prove as a game changer for Indian women’s football,” Aditi told Sports Lounge in a recent conversation regarding various aspects of team’s preparations..

#U17WorldCup for women can can be a total game changer in #India
It can help change the perspective of #womenfootball in India. I am confident that our team will put up a good performance #indianfootball #BackTheBlue #shepower @IndianFootball pic.twitter.com/TlrwY8D7B8

Aditi added that the women’s football has improved in India with regular domestic women’s tournaments organised at the senior and youth levels.

India was announced as the host country of the FIFA U-17 Women’s World Cup in March 2019. Spain are the defending champions, having won the title of the biennial tournament in 2018.

The showpiece event will be held from November 2 to 21 next year.

The team is currently undergoing a camp for the forthcoming back-to- back international friendlies against Vietnam on November 3 and 6.

Aditi is confident of the team’s performance in the two friendlies. “Vietnam are a tough team and it’s going to be difficult task for us. However we have already strategised about how to play against Vietnam.”

“Also Maymol Rocky (women’s football team head coach) has been associated with the team for a long time. So now  she has got an idea of our strengths and weaknesses, so we are getting trained accordingly,” she added.

Head coach Rocky believes that the team has now reached the point where they need to play higher-ranked opposition like Vietnam (34, as compared to India’s 57), in order to improve further.

“I think this is the first time that we will play against Vietnam. It’s all about playing against higher-ranked teams so that we can further improve ourselves,” she said.

Aditi Chauhan is the first woman player from the country to have played for an English club when she turned out for West Ham United in 2015.

When asked about a major difference between Indian football and the FA Women’s National League, she opined “There (Europe) exists a football culture and conversely here the game is still growing”.