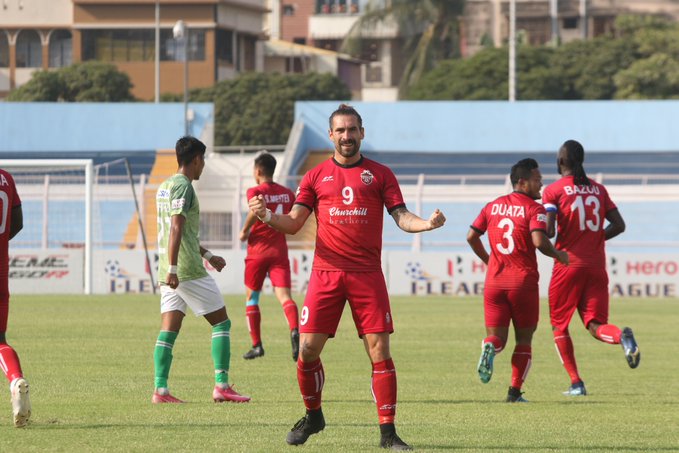 Kolkata: Churchill Brothers squeezed past a last-minute scare to beat ten-man Gokulam Kerala FC 3-2 in the I-League at the Kishore Bharati Krirangan in Kolkata on Monday.

Hero of the match Luka Majcen’s brace and Kingslee Fernandes’ goal helped Santiago Valera’s side extend their lead at the top of the Hero I-League standings to five points.

Gokulam Kerala made a dominant start to the game, and created a couple of chances in the opening three minutes, but Vincy Barretto and Philip Adjah were unable to get their shots away from inside the area.

Churchill custodian Shilton Paul had to be alert when Ubaid released Philip Adjah with a long kick forward, and the Ghanaian tried to sneak his volley at the near post in the seventh minute.

After the opening exchanges, Churchill started to knock the Gokulam Kerala defence on multiple occasions and finally broke the Malabarian defence with a well-built move in the 26th minute. Bryce Miranda knocked down Vinil Poojary’s cross, sending it across the goal, where Luka Majcen was waiting to bundle the cross into an empty net from close range.

Things took a turn for the worse for Gokulam in the 30th minute after Vincy Barretto was shown a direct red for his challenge on Vanlal Duata. The Red Machines, aided, by the sending off, continued to show their force of strength.

Churchill came close to double the lead in the 34th, but Bryce Miranda’s cross kissed the top of the crossbar before going out of play. The winger created another opening via a shot from outside the area, but his powerful effort was saved by Ubaid.

Vincenzo Annese’s side regrouped and came close to equalising on the 42nd minute after Shilton Paul misjudged Emil Benny’s cross, completely missing it and leaving the goal unchecked. The ball fell to Philip Adjah, whose shot was blocked by Duata.

The ten-man Kerala side was gifted a penalty after Vikas pulled Dennis Antwi down in the area on the 45th minute. However, Shilton Paul saved Philip Adjah’s spot-kick with his legs, keeping the scoreline at 1-0 in favour of the Red Machines at the end of an eventful first half. Gokulam returned after the break and played positive attacking football.

But just like the first half, they failed to capitalise on their momentum as Churchill Brothers doubled their lead in the 53rd minute after Kinsglee Fernandes’ shot took a deflection of Deepak Devarani, and beat Ubaid at his near post. Two minutes later, the goalscorer Kingslee almost became provider after Bryce Miranda latched on to his through ball, but failed to hit the target.

On the other end, Dennis Antwi had a magical moment of his own as he controlled and flicked Deepak Devarani’s long pass over defender Joseph Clemente. The striker, however, was unable to breach the scoreline as his powerful strike was matched by a brilliant save from Shilton Paul in the 70th minute.

Hero I-League topscorer Clayvin Zuniga twice came close to extend Churchill’s lead. His curling strike from outside the area crashed into the crossbar on the 62nd minute. 10 minutes later, the striker found himself just inside the area after a darting solo run. However, the Honduran failed to hit the target.

Philip Adjah pulled a goal back in the 80th minute with a well-timed volley after he ran onto Dennis Antwi’s layoff from Sebastian’s Thangmuansang’s cross. However, Gokulam Kerala were let down by their defence after Zuniga was brought down inside the area by Naocha Singh.

Although Luka Majcen’s penalty was saved the first time round by Shilton Paul, the referee ordered him to re-take the spot-kick, after an infringement by the keeper, who had come off his line earlier. Offered a second chance, Majcen made no mistake from the spot, giving Churchill a two-goal lead with three minutes of regulation time left.

Churchill should have been comfortable from there on. However, Gokulam substitute Jithin MS curled his shot past Shilton Paul after nutmegging a defender two minutes into added time, thus giving his side a late lifeline. Gokulam kept pushing for the eqauliser, but Churchill Brothers survived the late scare to win the game 3-2.