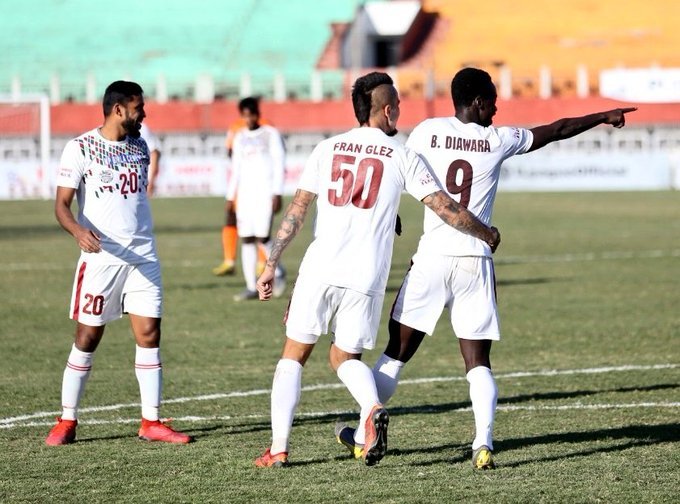 Imphal: Mohun Bagan extended their stronghold at the top of the I-League with a comfortable 3-0 victory over hosts Neroca FC in Imphal on Thursday.

Neroca remained at sixth pot eith eight points from as many matches.

Diawara, who scored his second goal of the campaign, was adjudged the man of the match for his impressive performance at the Khuman Lampak Stadium.

The visitors had the better exchanges in the nascent exchanges. With Mohun Bagan clearly running one-way traffic, Neroca were forced to put more men in the box.

It made the task of penetrating Neroca’s defence difficult for Vicuna’s men but Naorem toe-poked Bagan into the lead, finishing off the move he had started to give his side a well-deserved lead in the 27th minute.

The league leaders went in at half-time, being firmly in the driving seat and didn’t miss a beat even after the break.

In the 53rd minute, Naorem a delivered a calculated cross that found Diawara, completely unmarked, for Mohun Bagan’s second goal of the day.

Neroca failed to weave any real threat whatsoever, as the league leaders closed in on another victory. Despite being up by two goals, they were hungry for more and made no mistake in adding another goal in the fourth minute of stoppage time.

Late substitutes PM Britto and Komron Tursunov combined well, with the former playing a delightful through ball which left few tired Neroca legs at bay, while the latter made a great run to hunt it down and made no mistake in squaring it past Marvin Phillip to score his first goal for the club.