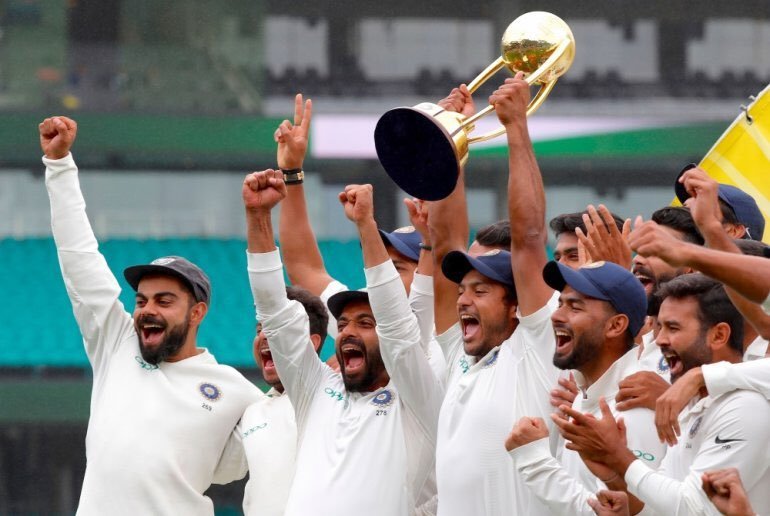 India are the top ranked team in Tests. Photo: @Twitter

Mumbai: Since the International Cricket Council (ICC) mooted the idea of four-day Tests many arguments and counter-arguments have come forth.

The ICC wants to free up the Future Tours Programme (FTP) calendar through reduction of Tests by a day. Many believe the idea is healthy.

But people like Sachin Tendulkar feels Test cricket should remain a five-day affair so as not to tinker with tradition.

But the question is not necessarily of tradition but of the FTP and injury management of players. Each team is battling injury concerns to their star players.

James Anderson, England’s foremost pacer for 15 years now, has been out of action more in the past one year than during his entire career. And he is only a Test specialist now.

Only few players play in all three formats and the various domestic leagues that are in vogue now. Unfortunately those who play all three formats spend more time on the physio’s table rather than on the field.

This is a worrying trend. The ICC justifies the four-day Test plan to free-up 30-40 days in the FTP calendar/year. If this proposed plan is put in place in order to provide more rest to players then it is a laudable thought.

But one strongly suspects that in the freed-up period, the ICC would squeeze in a T20 tournament. The situation is akin to the animals used in circus. Players are expected to deliver like machines and play non-stop.

Taking rest to tend to your body is also a double-edged sword for players. If anyone is in form, no matter how tired, he would ideally like to carry on the momentum.

Once you take a break, you may find it difficult to get back that rhythm. Various factors are involved in deciding when to take a break.

The question though is why is Test matches played for five days?

This is what Test cricket does to people.

It is because the pitch is expected to be batting friendly for the first two days as well as assisting pace bowlers. It is only in the fourth and fifth days that spinners come into play.

A batsmen’s technique against spinners on a turning track is considered the ultimate test for any batsmen in international cricket. It also provides a great contest between bat and ball.

A four-day Test match would kill the concept of playing two spinners in a team. Without the fifth and final day to exploit a weary track, captains would opt for only one spinner, who can also bat, in the team for four-day matches.

As it is, international teams, except India, hardly have quality spinners now. The four-day proposal is going to be a death knell for spinners, slowly.

Just as Test cricket needs the spectacle of tearaway pacers going full throttle on a green pitch, it also needs the guile of spinners in the fourth and fifth day to make the game interesting.

Ninety overs of the fifth day are very crucial in determining the outcome of any Test match. Often matches are won and lost on the fifth and final day.

But cutting it down, the actual test of players’ stamina, endurance, physical ability, mental toughness won’t be examined thoroughly.

On Tuesday, England beat South Africa by 189 runs inside the last hour of the fifth day of the second Test at Newlands. If this would have been a four-day Test, it would been a dull draw. The ICC should take note of this.

Rather than reducing the duration of Tests, the ICC could think of readjusting the stipulated overs each team faces in each innings.

Four-day Test a conspiracy against Asian teams, BCCI will not let it happen: Akhtar

In a four-day match (360 overs at 90/day), if a team batting first bats for around 150 overs, then the second team would have virtually no chance of winning the match. That is where the spectators would lose interest, which would be disastrous for the already shrinking nature of the traditional format.

In the 125 overs/innings model, the team batting second would have ample time to turnaround their fortune.

Tradition isn’t an issue at stake for Test cricket. Had tradition been so sacredly upheld, then cricket wouldn’t have welcomed ODIs, T20s and T10s.

If the idea is to give rest to players then the idea should be given a serious thought. But that won’t be the case as the ICC is looking at it from a commercial angle, i.e. to create one window for a new tournament, which is why the sanctity of Tests matches must remain as it is.