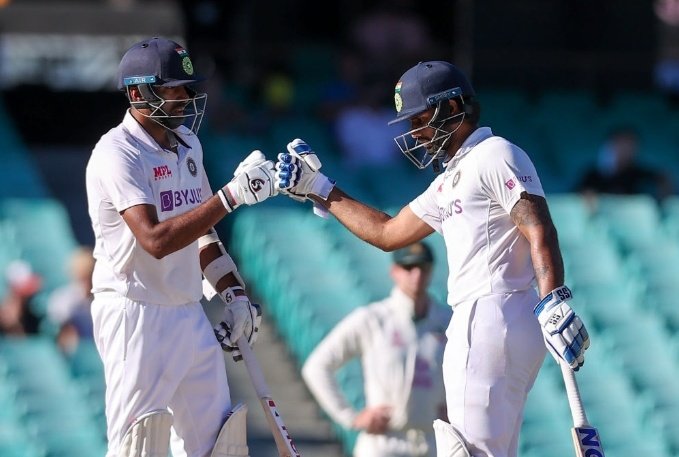 Sydney: Contrasting half-centuries from Rishabh Pant and Cheteshwar Pujara, followed by an exemplary display of grit and determination by Hanuma Vihari and Ravichandran Ashwin helped India draw the third Test against Australia at the Sydney Cricket Ground.

Chasing a mammoth target of 407, India reached 334/5 after batting for 131 overs before both the teams decided to shake hands on the final day of the Test match.

Vihari, who batted with a sore hamstring throughout the course of his innings, showed great resilience and remained unbeaten on 23 after facing 161 deliveries. He was supported brilliantly by Ashwin who also suffered a lot of blows on his body but didn’t throw away his wicket and remained not on 39 from 128 deliveries.

Earlier, Pant and Pujara shared a 148-run partnership for the fifth wicket after the visitors lost skipper Ajinkya Rahane (4) very early in the day.

The duo scored runs at a brisk pace and in fact, not only put India in a position to draw the Test, but also gave the visitors an unlikely hope of an improbable win.

An extraordinary display of resistance, fight and patience by India today 🙌#AUSvIND pic.twitter.com/5RLA5aqnQp

But Pant — after scoring 97 runs off just 118 balls with the help of 12 fours and three sixes — got out against Nathan Lyon in the second session and provided Australia an opening. The game tilted further in Australia’s way when Pujara — who scored his second half-century of the match during his 77-run knock — got out bowled, courtesy a peach of a delivery by Josh Hazlewood.

However, it was then that Vihari and Ashwin came into their own and first helped India end the second session at 280/5 on the final day.

The experienced pair continued to show great character during the final session as well and survived some nervy moments during the course of their unbeaten 62-run partnership which saw the team end the match in a historic draw.

Both the batters batted for more than three hours each during the course of their innings and declined Australia with an opportunity to go 2-1 up in the ongoing four-Test series.

Openers Rohit Sharma and Shubman Gill also made notable contributions in the second innings by scoring 52 and 31 runs respectively and helped India gain some confidence as they began their chase of the gigantic target on Day Four.

Australia had posted 338 in their first innings and then bowled out India for 244, thus attaining a 94-run lead. The hosts declared their second innings at 312/6, setting a 407-run target.

The series, currently tied at 1-1, will now be decided in the final Test beginning Friday at The Gabba in Brisbane.

Really happy with the fight we showed, says Rahane