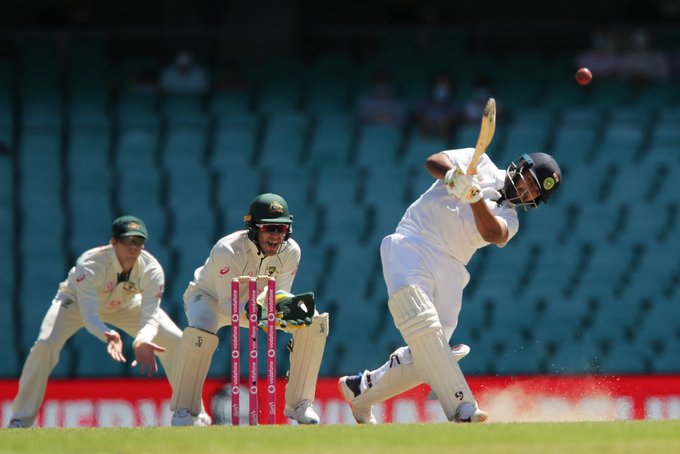 Sydney: Hanuma Vihari and Ravi Ashwin forged a crucial 50-run partnership to help India force a draw in the third Test vs Australia at Sydney on Monday.

Ashwin and Vihari batted well over a hundred deliveries each to earn India a memorable draw.

India lost the crucial wickets of Rishabh Pant and Cheteshwar Pujara as they reached 280/5 in their chase of 407 at the end of the second session on the final day of the third Test against Australia at the Sydney Cricket Ground (SCG).

At Tea break, Hanuma Vihari and Ravichandran Ashwin were at the crease on 4 and 7 respectively as India need another 128 runs to register what would be an incredible win.

Resuming the post-Lunch session at 206/3, Pant and Pujara batted just like they did in the first two hours of the day, collecting runs at a brisk pace. Pant took chances and scored boundaries and gave a huge scare to the Australian team before he got out just three short of what would have been a well-deserved century.

Trying to hit a maximum against off-spinner Nathan Lyon and get to his third century, the wicketkeeper-batsman was caught by Pat Cummins at 97, thus giving Australia an opening.

Pujara, who has been criticised for his ultra-slow batting in the first innings, didn’t seem to get affected and in fact scored three consecutive boundaries against Cummins. During the course of his knock, he became the 11th Indian batsman to score 6,000 Test runs.

However, at his individual score of 77, he got out bowled to a peach of a delivery by Josh Hazlewood and put Australia again on top.

Ashwin and Vihari then made sure India didn’t lose any more wickets till the end of the session and also ensured the possibility of all four results remained in the final session of the match.