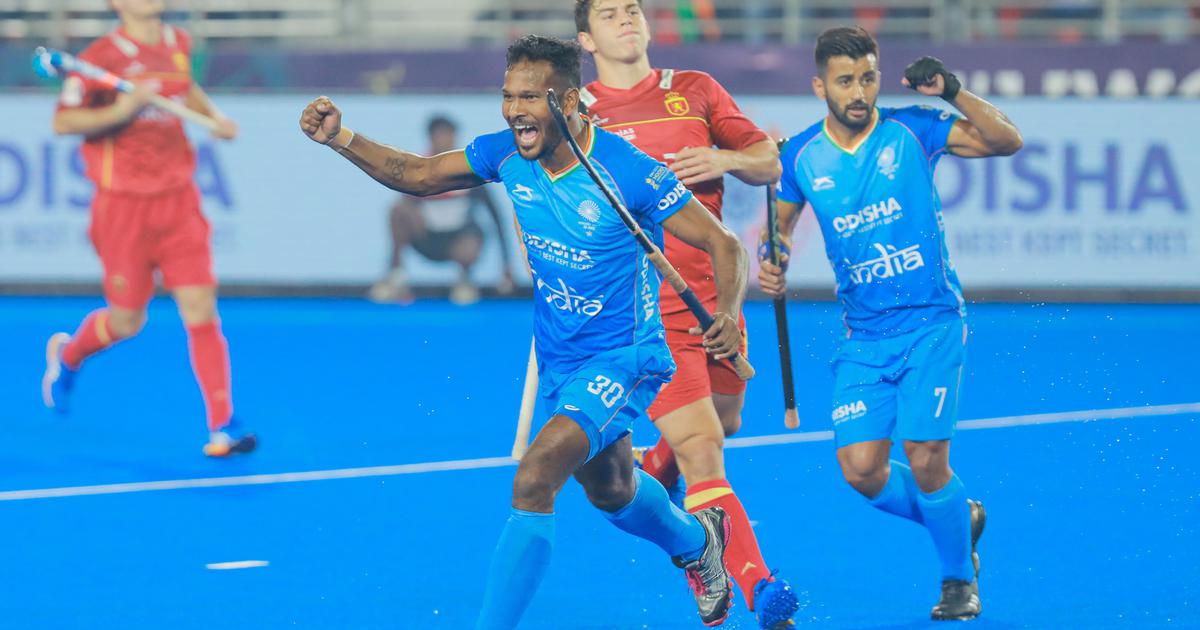 India head coach Graham Reid is happy with the team’s performance following their win in the campaign opener against Spain in the FIH Men’s Hockey World Cup, and has praised them for their defensive tactics in denying the opponent any chances despite being reduced to 10 men.

India’s 2023 Hockey World Cup campaign began with a 2-0 victory over Spain, earning them three crucial points in the Group D clash here at the Birsa Munda International Hockey Stadium in Rourkela on Friday.

“We were able to keep the ball out of the goal. We were reduced to 10 men (after a yellow card in the final quarter). But we practised playing with 10 men a lot before the tournament keeping in mind that this could happen,” said Graham in a post-match conference.

Reid was also happy with how his team “got in front” a lot.

“We were first to the ball. It was really important and made a difference,” added the coach.

The coach said that most of the players did well during the match.

“It was good that our defence stood strong. We have to be strong defensively and we work on it daily. Whether you score or not, you always have to be at your best while defending. You cannot do silly mistakes. All boys did well, even though we were a man short,” said Harmanpreet.

On not being able to convert a penalty corner into a goal and missing a stroke, the skipper said that it is a part and parcel of the sport.

“The next match (against England) is important. I would like to forget what happened in this match and move ahead. Our team’s performance was good, we got a lot of penalty corners and it was a positive,” he added.

The skipper said that there is no easy match in the World Cup and no team should be taken lightly.

Coming to the match, Amit Rohindas (12′) and Hardik Singh (26′) scored for India. In spite of Abhishek receiving a 10-minute yellow card in the final quarter, the Indian team held off the Spaniards and maintained a clean sheet.

Spain attacked right from the start as India took time to settle down in the initial minutes of the first quarter. However, the Indian players found their rhythm soon and took possession of the ball.

The first 10 minutes in the first quarter saw both teams looking to attack and take the lead early in the game. While the hosts looked to attack the Spanish left flank, the European side were unable to penetrate the resolute Indian defence.

India earned their first penalty corner (PC) of the game in the 12th minute thanks to an outstanding effort from Abhishek in the circle. However, the Indians were unable to score as Jarmanpreet’s drag missed the target and his attempt was deflected off a Spanish defender.

The hosts got their second PC in the first quarter which was taken by captain Harmanpreet Singh. An alert Amit Rohidas converted the rebound as the host took the lead in the 13th minute.

India ended the first quarter with a 1-0 lead over the Spanish team with the hosts penetrating their opponent’s box regularly.

Krishan Pathak replaced PR Sreejesh as India’s goalkeeper for the second quarter. The Indian defence was put under the pump by Spanish attackers in the second quarter as they won their first PC in the 24th minute. However, the European side was unable to convert the opportunity at the Indian goalpost. Pau Cunill failed to find the target as Pathak deflected the flick from the defender.

Attacking midfielder Hardik Singh displayed fabulous stick skills to run into the box from the left side and stormed past the Spanish defenders to score a spectacular field goal, extending India’s lead to 2-0.

Spain was on the verge of finding their first goal in the dying minutes of the second quarter but the combined defence of Surender Kumar and Pathak denied the European team the goal.

The first half ended with India leading 2-0 as they scored once in both quarters and maintained a clean sheet against a spirited Spanish team.

India began the second half with an opportunity to extend their lead to three goals after Akashdeep Singh managed to get a penalty stroke for the hosts. However, Indian captain Harmanpreet Singh failed to put the ball past the Spanish goalkeeper Rafi Adrian.

Abhishek was a live wire in the field and caused trouble for Spain. India was awarded another PC, the fifth for the hosts in the 37th minute. But the Indian team was unable to convert it.

Shamsher Singh’s failure to help the ball into the goal near the post robbed India of scoring the third goal of the game. The Indian team put forth a good effort on the field and was excellent with their passes, but a chance went begging after Shamsher failed to finish.

Spain had a stroke of luck at the beginning of the fourth quarter as Abhishek got a yellow card and the hosts were reduced to 10 men for the final quarter. The Spanish side was awarded two PCs in the fourth quarter but failed to convert on both occasions as India secured a 2-0 win in their World Cup opener.

Amit Rohindas was declared the player of the match for his first goal for the hosts and his clinical performance in the match.

India secured three vital points in Group D and is second on the points table. England too managed three points against Wales but was placed in the first position in the group owing to their superior goal difference.

They defeated Wales 5-0 earlier in the day. India will face England on January 15 at the Birsa Munda International Hockey Stadium in Rourkela.