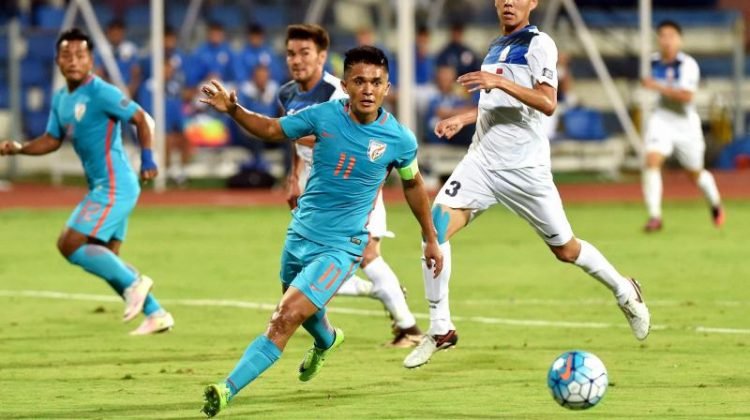 Sunil Chhetri is the second highest active scorer in international football, only behind Cristiano Ronaldo but ahead of Lionel Messi.

New Delhi: Difficulty in breathing is one of the symptoms of Coronavirus, say medical experts. Yet, some soccer fans in India breathed a sigh of relief (secretly though) when the pandemic forced the indefinite postponement of India’s remaining 2022 FIFA World Cup qualifying matches!

They can’t be blamed. Surely. The campaign looked dismal from all angles. With three points from five matches, Igor Stimac’s boys were out of contention for a place in second round. The rescheduling of dates meant more time to prepare. A chance to start afresh.

Indian captain Sunil Chhetri doesn’t have faith in this theory. He was happy to play on the scheduled date.

Saying this, Chhetri hastens to add: “I am not giving any excuses. Now we have more time, but we don’t know how we are going to utilise that time. We may be home quarantined for a few months…..but again that could be true for all the players around the world. It will be equal playing field because the whole world is struggling. Qatar, Afghanistan, Bangladesh, everybody,” he points out.

The Indian captain, one could understand, is now more focused on using the joint campaign for making the final rounds of 2023 Asian Cup in China. He had played it twice before in 2011 and 2019. He wants India to make it a habit; to play it once in 10 years won’t help the team.

“For us, it is like whenever we get back again, we have to pull up our socks and start again. But we have to give a good account of ourselves. After this World Cup qualifiers, we should qualify for the AFC Cup, minimum.

We’ve always received more than we can give. Which is why in this time of need, all of us national team players have come together and put on the table a sum that has been sent to the PM-Cares Fund to help India’s fight with the pandemic.

“Then you know you are there. 12, 15, 16, whatever….you are there in the rankings. If you slip down, from there, again you have to climb a big ladder. We should continue with the performance we gave against Qatar (goalless draw), whoever we should play. We should convert more chances what we get against teams like Bangladesh and Afghanistan.

“This way we can build on it. The need of the hour is consistency. Then only you can improve and stay there,” says Chhetri.

The scorer of 72 international goals knows exactly what he has been talking about. Given the structure of Asian Cup qualifiers, India are still very much in contention.

In the joint qualifiers for 2020 World Cup and 2023 Asian Cup, the top finishers of eight groups and four second best teams form the elite lot. They qualify for the second round of AFC World Cup qualifiers and straightaway book their berths for 2023 China.

Well, India can’t make this. Now, to think about the worst, even if India finish last in the five-team Group E, they would still get an opportunity. The bottom finishers of all eight groups would play knock-out; four winners will join the second round in Asian Cup qualifiers.

But Stimac’s team have three points and expected to clinch the third or fourth place in the group. In eight groups, 16 teams will finish third or fourth. These 16 will be joined by four from the bottom finishers.

Four second placed teams in the groups (who did not make the second round), will be added to this 20 teams to make it 24 to be divided into six groups. Top two of each group will be eligible for 2023 China.

Chhetri is certainly gearing up for this grueling battle. India did it last time under his captaincy. So, why not this time? Let’s do an encore, he is perhaps thinking.

But then, it is easier said than done. Chhetri knows it well. Asked, he said: “For that, we have to play more matches. Once the quarantine is over the federation will have to sit down and make one of the best calendars for everyone. For the league, for the national team, for the juniors, everyone. For all I know, we must be there in Asian Cup.”