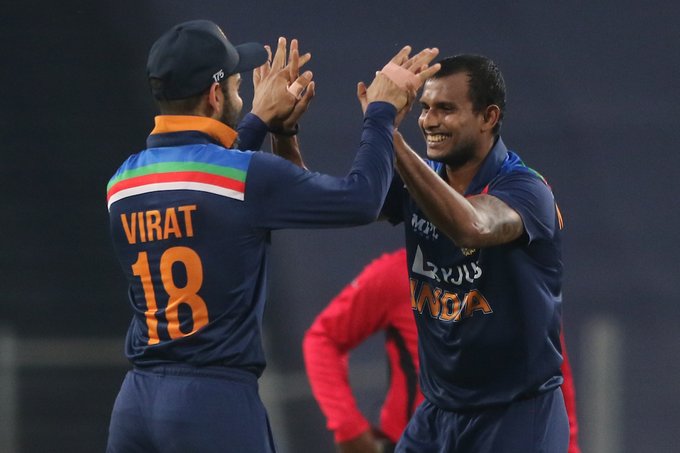 Pune: India beat England by 7 runs in the third and final ODI here on Sunday, winning the series 2-1.

Sam Curran (95 not out off 83 deliveries) threatened to take the game away from India after the home side had reduced the Englishmen to 200 for seven at one stage in chase of 329.

However, the total proved too much in the end. Shardul Thakur took four wickets for 67 while Bhuvneshwar Kumar took three wickets for 42 runs.

Earlier, Rishabh Pant and Hardik Pandya hit stroke-filled half-centuries but Indian lower-order caved in to settle for 329 against England.

Pant’s sparkling knock of 78 off 62 balls was well supported by Hardik (64 off 44 balls) but India lost their last four wickets for a mere eight runs to finish at least 30 runs short on another batting belter.

Pant, during his career-best knock plundered four maximums and five boundaries, while Hardik had five fours and four sixes during their 99-run stand for the fifth wicket.

The senior Pandya at times was finding it difficult to bring his bat down in time while facing the pace of Woods and didn’t get a single boundary consuming nearly six overs of the innings.

It was a day when India’s top order was troubled by English spinners with Adil Rashid’s (2/81 in 10 overs) googlies in successive overs removing Rohit and Dhawan.

Skipper Virat Kohli (7) tried to rock back and play a cut shot only to be bowled by a Moeen Ali off-break.

KL Rahul was sent back by a friendly full-toss from Liam Livingstone leaving India in a spot of bother at 157 for 4 just before the hafway stage of the innings.

However Pant started off from where he had left in the last game and ditto for Hardik as they took apart Rashid by reading wrong ‘uns well.

Hardik smashed three sixes off Ali which forced the captain to take him out of attack as 200 came in the 30th over.

Pant brought up his third ODI fifty with a towering six and was in his elements as he took on both the pacers and spinners and so was Hardik.

When it looked like the duo would go berserk, Curran removed Pant as Jos Buttler took a stunning reflex catch to his left with his body balance tilted towards right. And then Ben Stokes cleaned up Hardik as the hosts again slipped to 276/6.

A quick fire 30 off 21 balls by Shardul Thakur was the only consolation in an otherwise poor show by lower order.

Shardul, Bhuvneshwar missing out on accolades is surprising: Virat Kohli