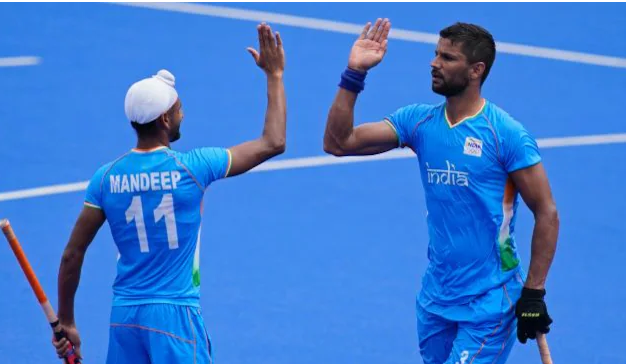 New Delhi: India swept the International Hockey Federation’s  annual awards on Wednesday, claiming all the top honours based on a voting system which was lambasted as a “failure” by men’s Olympic champions Belgium, prompting the FIH to say that it would try to figure why some associations did not cast their ballot.

Five Indian players and the head coaches of both the men’s and women’s teams in Tokyo claimed the top honours across different categories after fetching the maximum votes. The men’s hockey team had won a bronze, its first in 41 years, in the Tokyo Olympics, while the women’s side had finished an unprecedented fourth in the showpiece.

The drag-click duo of Harmanpreet and Gurjit were the top-scorers in their respective team’s stellar run at the Games.

Men’s team coach Graham Reid and women’s coach Sjoerd Marijne were also voted the best. While Reid is still with the team, Marijne’s tenure ended after the Tokyo Games.

Hockey Belgium reacted sharply to the announcement of the winners and questioned the process as none of their Tokyo Games champions managed to win an award.

Votes from National Associations—represented by their respective national captains and coaches—accounted for 50 per cent of the overall result, while fans and players (25 per cent) as well as media (25 per cent) made the other half of the votes.

It is to be noted that only 19 associations from the 42-strong European bloc cast their votes, compared to 29 out of 33 in Asia.

“Hockey Belgium is very disappointed with the outcome of @FIH_Hockey Star Awards. A gold winning team with multiple nominees in all categories but doesn’t win a single award demonstrates failure of the voting system. We will work with FIH to ensure a fairer system in the future,” the Belgian association tweeted.

The sentiment was shared by the team’s official handle as well.

“We fully agree! This is not normal! The credibility and image of our sport is once again facing hard times. It’s a pitty (sic) @FIH,” stated the Red Lions.

“And with a record number of almost 300,000 fans casting their votes, fan participation in the FIH Hockey Stars Awards has been exceptional,” the FIH said.

Following Belgium’s objection, FIH issued a statement to clarify its stand and promised a review if necessary.

“As one can see, all winning athletes have topped the standings in each of the three voting groups…As always FIH will conduct a review of the FIH Hockey Star Awards and make adjustments wherever deemed necessary. In particular, we will focus on establishing why a number of national associations failed to vote,” it said.

The nominations from Belgium (men) and the Netherlands (women), who were not only crowned Olympic Champions but also won the 2020-21 FIH Hockey Pro League, finished behind the Indians once the votes were counted.

Among women, Eva de Goede and Frederique Matla of the Netherlands clinched the respective second and third places in the Player of the Year awards while Alyson Annan of Australia finished second for the FIH Coach of the Year Award.

With the FIH Hockey Stars Awards skipped in 2020 due to the impact of the COVID-19 global health pandemic on the international calendar, this year’s awards covered the period from January 2020 through to the conclusion of the Olympic Games Tokyo 2020, the FIH said.

“The voting process started on 23 August and concluded on 15 September 2021. Votes from National Associations – represented by their respective national captains and coaches – counted for 50 pe cent of the overall result, while fans and players (25 per cent) as well as media (25 per cent) made the other half of the votes,” it added.

“This is a great moment for Indian hockey as all our Indian nominees for the FIH Stars Awards have been announced winners.

“After the historic performances in Tokyo by both Indian Men and Women’s Hockey teams, the support from Indian fans from across the globe has been overwhelming,” he said.