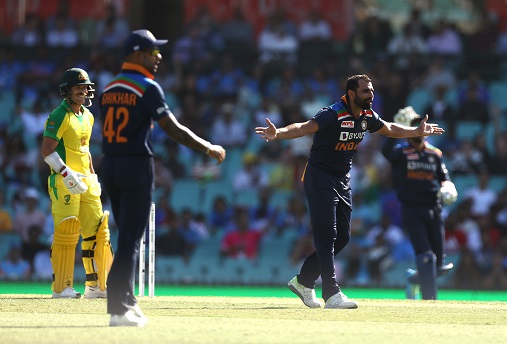 Sydney: India have just one day to rebound and recover from the psychological blow that Australia inflicted on them by winning the first One-day International after setting their highest-ever total in the 50-over format against India in Friday’s game at the Sydney Cricket Ground.

The two teams face each other in the second ODI at the same venue on Sunday.

Australia had hammered 374 for six wickets in 50 overs, built on centuries from captain Aaron Finch and Steve Smith, half-century from David Warner and a 19-ball 45 from Glenn Maxwell.

Josh Hazlewood then rubbed salt to India’s wounds as he removed three of the top four batsmen inside the first 10 overs with short deliveries as Virat Kohli’s team, despite a fightback from Hardik Pandya, fell short by 66 runs.

The ODI series is the first for India in the ICC Cricket World Cup Super League, from which the top seven teams will qualify for the 2023 World Cup, to be held in India.

India, playing in the retro jersey from 1992 World Cup, faced problems on different counts — the bowling and fielding was not up to the mark and their over rate was slow enough to force ICC to dock 20 per cent of the players’ match fees.

None of the bowlers, except Mohammed Shami, could go below six runs an over with leg-spinner Yuzvendra Chahal conceding 89 in his 10 overs. Chahal’s is the most by an Indian bowler in ODI history.

India could replace Chahal with Chinaman bowler Kuldeep Yadav in Sunday’s fixture although the bigger problem for India is that they don’t have enough bowling options to back the five bowlers.

Former England skipper Michael Vaughan had tweeted on Saturday that India’s team structure is too old-fashioned. “This Indian ODI team is too old school for me…Just 5 bowling options & the batting isn’t deep enough!!!” he said.

It meant that the team lacks an all-rounder unlike Australia.

Kohli lamented after Saturday’s match that the team doesn’t have someone like Glenn Maxwell or Marcus Stoinis.

“Unfortunately, Hardik is not fit enough to bowl, and we don’t have other allround options to pick from either, someone like Stoinis or Maxwell,” he said after the match.

Pandya, who is playing only as a batsman as his bowling is not match-ready, also agreed with it and said that India need to prepare more all-rounders for the future.

Lack of all-round option means India have no one to fall back on in case a bowler has an off-day like Chahal did on Friday.

Australia, on the other hand, have plenty of all-round options. Despite Stoinis injured and doubtful Sunday’s second one-day match, the hosts have a range of all-rounders to choose from with Cameron Green likely to get a look-in.

Smith had praised Green in the post-match presser, saying that he faced him in the nets for a couple of deliveries and the youngster looked good.

Kohli had also blamed his team for not getting into ODI mode despite getting enough time and practice during the two-week quarantine period. The team’s fielding was poor. They dropped a few catches in the outfield and conceded runs in the latter part of Australia’s innings, showing that they have not yet got out of T20 mould.

Kohli admitted that the body language of the players wasn’t good after 25 overs.

The second ODI will also hold significance for Kohli as he would like to better his poor ODI average at the SCG. While he has done well in the Tests and T20 Internationals at the venue, his ODI average at SCG has been below-par, just 11.4, in six 50-over innings. The 21 he made on Saturday is his highest ODI score at SCG.

Australia, on the other hand, looked good with their top-order scoring heavily. Their bowling, except for left-arm pace bowler Mitchell Starc, too, was on the money. Josh Hazlewood (3/55) and leg-spinner Adam Zampa (4/54) were among wickets.