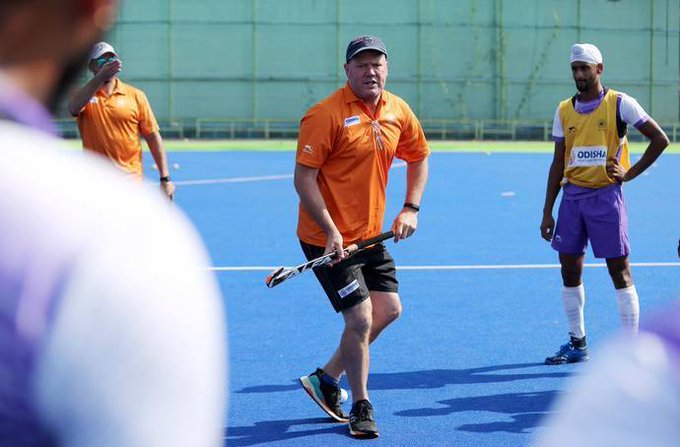 Bengaluru: Head coach of the Indian men’s hockey team Graham Reid believes the players worked extremely hard during the national camp at the Sports Authority of India (SAI) facility in the last four months and are now close to the levels — in terms of fitness, training and skills — which they showcase in the international matches.

“We have done everything possible to maintain and more recently get the players back to the level they will need to be to compete on the world stage,” said Reid.

“Our fitness tests in the strength, weight, speed and muscle components show that we are on target. Our training sessions output data are approaching our February figures (when the team played FIH Hockey Pro League in Bhubaneswar). I believe, we are close to the level we showcase in our international matches,” he added.

Reid further commended the level of commitment and determination shown by the team, having dealt with challenges of spending over four months in a bio-secure environment in the SAI facility with no social activities amid the Covid-19 pandemic.

“Given the extremely difficult circumstances for the last four months, I am pleased with where we are and how the players have conducted themselves in the bio-secure bubble in SAI. In a normal year, you have four-six weeks in camp and the players get 1 week off to spend with their friends and family,” said Reid.

“On the weekends they normally leave the campus and visit the mall or cinema etc. However, this year there has been none of that and has been a very tough mental test for all of us. But I am happy with the way players have handled this situation,” he added.

The head coach further stated that he is hopeful the team gets to play international matches early next year.

“With the support of Hockey India, we have planned for matches from early in the next year. These matches will ideally show us the level we are truly at and the areas that will require work on leading into the Olympic Games.”

Expressing the importance of this break, the 56-year-old said, “It is extremely important for them to relax mentally and physically after a very hectic past four months. This break will help not just the players but also the coaching staff the opportunity to hit the refresh button and be ready for next year.”