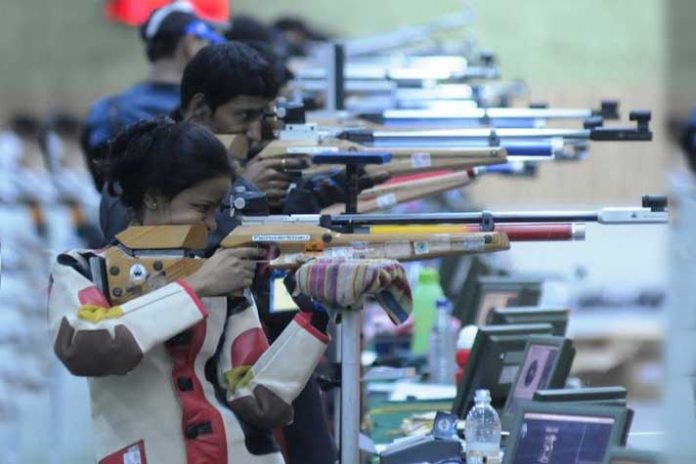 New Delhi: Online international shooting is here to stay as highly-competitive marksmen and women, including Indian teen sensation Manu Bhakar, “look forward” to more such events at a time when a pandemic has left them confined to their homes.

The shooters participating in the first-of-its-kind international online competition on Wednesday gave a thumbs-up to the initiative, a brainchild of former India rifleman Shimon Sharif.

World Cup gold medallist Bhaker, who was not aware that the International Shooting Sport Federation (ISSF) has cancelled all its tournaments this year, said she will be there taking aim again when the next online competition takes place.

“It’s a great initiative because at least we are together, we are united. Sport is again uniting us from across the world. We are shooting in different time zones but still we are together,” Bhaker, who finished third in the 10m air pistol event, said.

She shot 572 across 60 rounds, low by her standards, but this was not just about scores.

“It was lovely being a part of this competition. I didn’t know that ISSF has cancelled all its competitions this year, but I think I will be joining in a few more competitions.

“This online shooting is really awesome and I will be there,” the Youth Olympics and Commonwealth Games gold medallist added.

World number one in 10m air rifle, Divyansh Singh Panwar, who took aim from his sitting room and had the target placed on the cupboard of his bedroom, found it innovative.

Two-time Olympian Sanjeev Rajput was also a part of the action. He participated in the competition after making an arrangement in the basement of his building.

“Improvisation in difficult times, with an online shooting competition! Good to be a part of this,” World Cup gold medallist Rajput tweeted.

“Was difficult being in competition mode after a month in self isolation. But, much needed!”

Meghana Sajjanar, who was among the Indian shooters to shine in the tournament, finished second in 10m air rifle with 630.5.

“It was different but I got adjusted to the situation. The experience was really good,” Sajjanar said.

Austria’s Martin Strempfl finished at the top in air rifle with 632.5, while Etienne Germond of France was placed third with 629.4.

In fact, Martin shot only a point less than the world record. Interestingly, Peter Sidi, who holds the record since 2013, was doing commentary on Wednesday alongside Olympian Joydeep Karmakar and Sharif.

In the 10m air pistol competition, India’s Amanpreet Singh, who hasn’t been practising for a while, shot 576 to finish at the top with Ashish Dabbas at second place, with 575. Bhaker was third.

Sharif was overwhelmed by the response.

“The response has been more than what I was expecting. Look at the number of views on Facebook, it’s more than 10000.

“This only had qualification and in the next competition, which we are planning to organise in another week’s time, we plan to have the finals also,” Sharif said.

Pistol ace Abhishek Verma, who could not take part in the competition, tweeted, “Excellent. This will work as a mental booster for all the shooters throughout the world”.