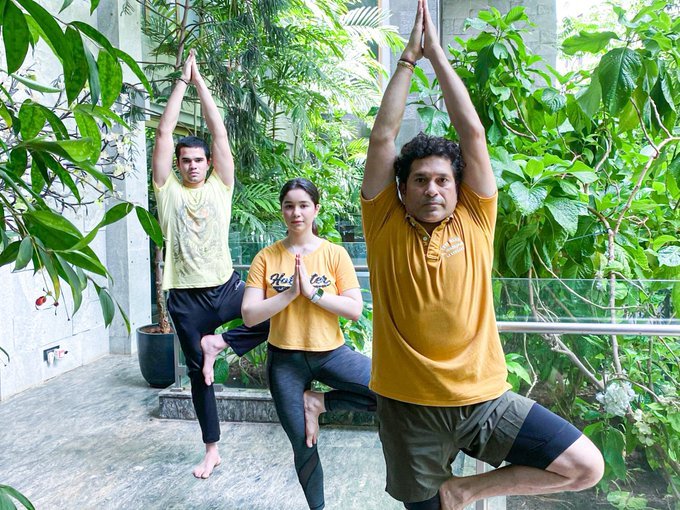 New Delhi: On the occasion of World Yoga day, cricket legend Sachin Tendulkar and world badminton champion P.V. Sindhu were among many Indian sportspersons who came forward to spread the message of staying fit.

Tendulkar posted a picture of his son Arjun and daughter Sara doing yoga together on Father”s Day. He tweeted: “Celebrating #FathersDay by doing some Yoga together!”

Yoga has been with us since times unknown and is one of the most effective health practices of all. Switch to a healthier lifestyle and take the pledge to be happier this #InternationalYogaDay @bankofbaroda https://t.co/l84FAjnsjP

“Yoga has been with us since times unknown and is one of the most effective health practices of all. Switch to a healthier lifestyle and take the pledge to be happier this #InternationalYogaDay,” star shuttler Sindhu said in a tweet replying to a yoga post by Bank of Baroda.

Batting great Virender Sehwag also urged people to take up Yoga. He posted a video, saying: “Thoda waqt bhale lagega, but Yoga Se Hi Hoga ! (It will take a little time but yoga is the solution).” In the video the former India opener can be seen performing a drill.

Veteran off-spinner Harbhajan Singh posted a photo on Twitter of him along with his wife and daughter doing yoga. “Yoga is life,” he said.

“Yoga is the journey of the self, through the self, to the self” – Bhagavad Gita #InternationalYogaDay pic.twitter.com/wM3abG8dga

“Yoga is the journey of the self, through the self, to the self – Bhagavad Gita,” tweeted former India opener Gautam Gambhir.

Batting great V.V.S Laxman said in a tweet that yoga is not only done on the mat but also beyond. He tweeted: “Yoga happens beyond the Mat. Anything you do with attention to what you feel is doing Yoga.”

“Yoga is not a part of life, it”s a way of life,” tweeted veteran India batsman Suresh Raina.

India batsman Shreyas Iyer posted a photo of his dog with him on Twitter, saying: “Celebrating yoga and music day with my partner in crime, who has her own style of meditation.”

Fall in love with taking care of yourself. Mind. Body. Spirit#InternationalYogaDay pic.twitter.com/UkkXGX5wTv

Premier League India also joined in with a post on their Twitter handle where Liverpool”s Egyptian striker Mohamed Salah is seen celebrating a goal in a yoga posture during a game. “If you are looking for inspiration on #YogaDay,” the post read.

Star India shooter Manu Bhaker too shared her yoga drills on Twitter with a post in Hindi which read: “Happy International Yoga Day. Do yoga regularly and be healthy.”

Golf, rowing federations to get provisional recognition from government