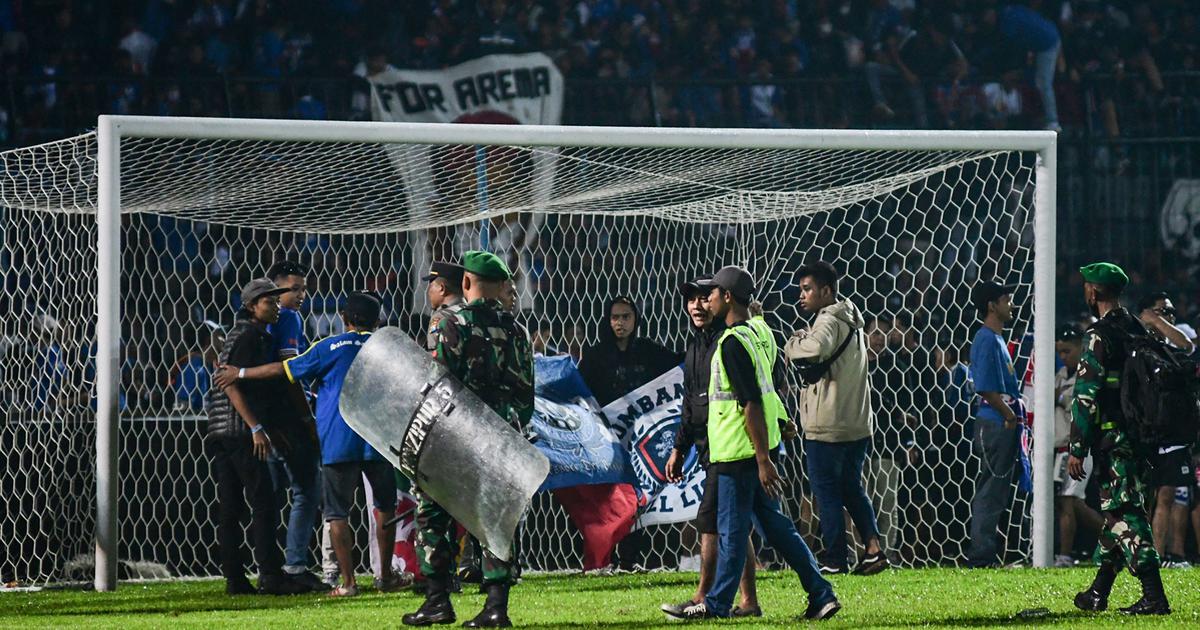 Indonesian investigators are still assessing events that culminated in one of the deadliest disasters in the history of football.

A pitch invasion and a stampede prompted by police firing tear gas in a packed Indonesian stadium on Saturday left at least 131 people dead, including 32 children.

Using interviews with officials, witness accounts and verified images and footage from the night, AFP pieces together how the tragedy unfolded in just 10 minutes of chaos after the game finished at the Kanjuruhan stadium in the city of Malang.

After the game kicked off at 8:00 pm local time, the match ran peacefully through the first and second halves with the stadium packed to capacity with about 42,000 home Arema FC fans.

The game ended at 9:57 pm, according to image metadata. But 10 minutes before it finished, some exit gates remained closed contrary to established practice. This was due to “late commands” and because officers “had not arrived” yet, according to Indonesian football association spokesperson Ahmad Riyadh.

Several witness accounts and images support this version of events. But police dispute this and say the exits were all open.

After the final whistle, the situation began to unravel.

Players were resting on the pitch after the defeat while the result sank in, according to video metadata. They then walked across the field from the west stand to greet waiting fans in the east stand at 10:17 pm, pictures and video metadata showed.

Two supporters entered the field to meet the players. One appeared to confront them but was then seen hugging a member of the team, according to photos. Several fans can be seen in video footage raising their middle fingers to players from the terraces.

A third fan then ran onto the field, attracting the attention of stewards who tried to stop that person, videos and photos showed.

A fourth spectator also came onto the pitch, according to footage, where security officers can be seen pointing to him but were late to catch him.

Tens of other fans entered the field, pictures and video showed. More stewards tried to stop them, asking them to return to the stands.

At 10:18 pm, stewards began to move players back to the changing rooms as fans continued to enter the field, according to footage.

At 10:19 pm, footage showed the first flare was thrown from the west stand, landing near where the players were escorted out. Dozens of fans had by now invaded the pitch.

Another flare was then thrown from the same stand, according to the same footage.

The first riot police – armed with shields and batons – were then deployed from the north side of the stadium, videos showed.

At 10:20 pm, fans backed themselves up to the east stand as officers ran at them, some hitting supporters with sticks, according to photographs and video footage. Items were thrown at officers from the crowd.

At 10:22 pm, clashes started between police and fans on the pitch, footage showed. Some fans can be heard asking their friends to return to the stands.

Footage showed officers move towards the north stand to beat back supporters as the situation spiralled out of control.

According to footage, at about 10:25 pm, police fired tear gas for the first time into the east and west stands. Supporters responded by throwing items at officers and some entered the pitch to do so.

Many supporters rushed to nearby locked gates, according to images, in an attempt to save themselves from the smoke, which witnesses say left people choking and struggling to breathe.

As they fled, many became trampled or choked to death as a crush developed at several gates that were closed and some that were open but too small for so many people to pass through, according to survivors.

Survivors said dozens died at Gate 13, where the west and south stands meet, in a crush. Authorities have not confirmed how many were killed there.

After this, photographers and video journalists stopped shooting to help victims as police stood by, according to several witnesses who spoke to AFP.

Images captured a few minutes later showed many of the officers had disappeared from the pitch as supporters tried to run from the tear gas.

Police have claimed around 3,000 spectators eventually invaded the pitch.

Photographs showed fans carrying victims to an ambulance on the field or outside the stadium.

Within minutes dozens had died, with many more later sent to hospital, as Indonesia faced a moment of reckoning on crowd safety at sports events.

Lionel Messi says Qatar 2022 will ‘surely’ be his last