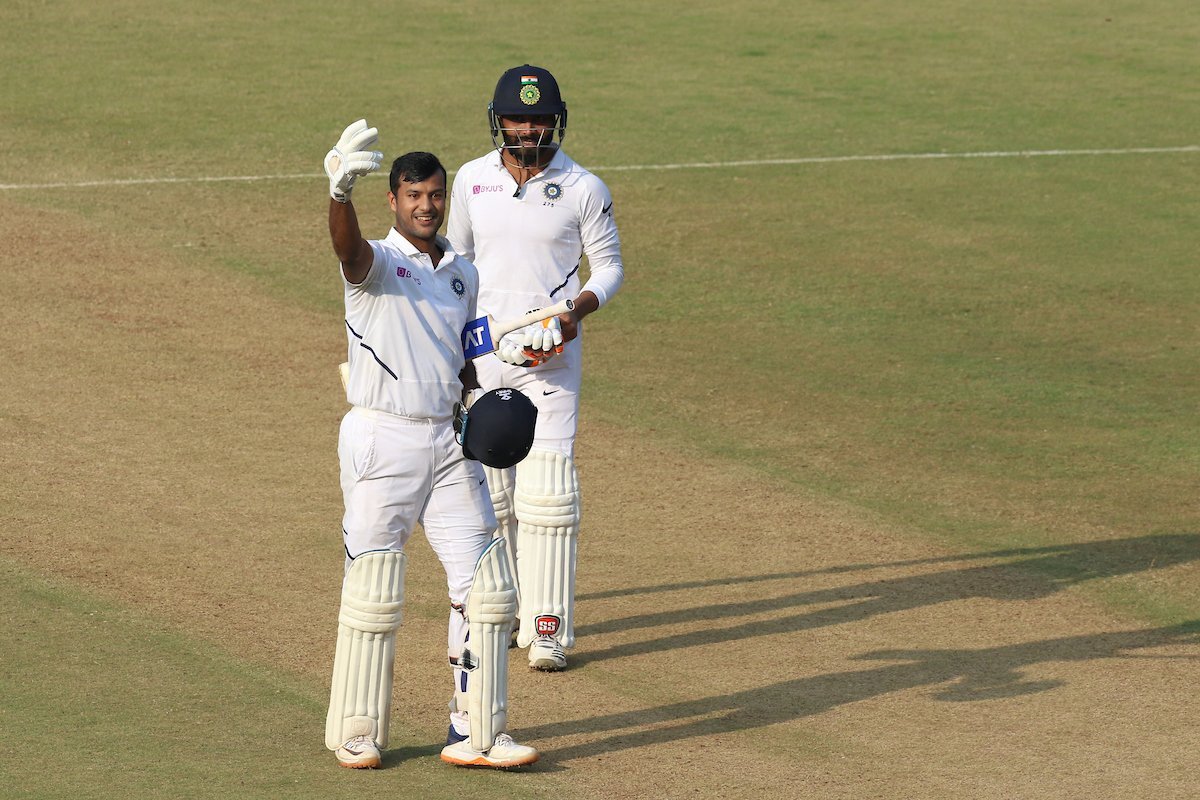 Indore: Opener Mayank Agarwal grinded a below-par Bangladesh bowling unit with a career-best second double hundred as India buried the visitors under a deluge of runs on the second day of the opening Test here on Friday.

Friday solely belonged to Agarwal, who in this particular innings, managed to overshadow a batting line-up that has Rohit Sharma (6), Cheteshwar Pujara (54 off 72 balls), skipper Virat Kohli (0) and Ajinkya Rahane (86 off 172 balls) in its ranks.

Agarwal’s partnership of 91 for the second wicket with Pujara and 190 for the fourth wicket with Rahane were however important in the context of the Indian innings.

A spectacular innings from Mayank Agarwal comes to an end 👏

No Indian has ever hit more sixes in a Test innings 💥#INDvBAN pic.twitter.com/HdDB6TUUzM

The match might be over inside three days if India declare overnight.

Bangladesh’s brittle batting line-up may not have the mental capacity to withstand India’s pace barrage if first innings was any indicator.

For Agarwal, his voracious appetite for runs, carefully cultivated through solid performances at the domestic and India ‘A’ level, is paying dividends.

Exactly one year ago, Agarwal was in the fringe, scoring those “Daddy Hundreds” but lost out to the prodigious talent of Prithvi Shaw, who was given preference and a headstart at the international arena.

Destiny, however, had other plans as Shaw got injured and also lost a bit of focus. That was the opening Agarwal was looking for and he is showing with each innings that he is not going anywhere too soon.

The Shubman Gills and the Shaws may have to wait a wee bit longer.

Having scored those tough runs Down Under, Agarwal has now earned the right to consolidate his place with some heavy duty scoring. And he is doing that exactly.

It did help that Bangladesh got their bowling combination awfully wrong.

On a pitch, where someone with express pace and variation was needed, the visitors fielded two specialist spinners in left-arm orthodox Taijul Islam (0/120 in 28 overs) and off-spinner Mehidy Hasan Miraj (1/115 in 27 overs).

The spin duo was like lambs for slaughter as Agarwal went after them with all his might.

All the eight sixes that he hit came off the two spinners. This apart, he also hit 28 boundaries during his career-best international score.

The coveted double hundred came by lofting Miraj over long-on while the stand-out six was an inside out over extra cover off Taijul. Then there was one down the ground and a couple over long-off.

The spinners were either bowling too short or too full outside the off-stump. At one stage, Miraj, a former Bangladesh U-19 captain, completely lost confidence as he started coming round the wicket.

The negative field placement for an off-spinner — a deep point for saving a cut shot and deep square leg for saving a pull-shot — was a reflection of Bangladesh’s approach.

Abu Jayed (4/108 in 25 overs) was the only bowler, who showed some heart getting the wickets of Pujara, Kohli and Rahane but his new ball Ebadot Hossain (1/115 in 31 overs) neither had pace nor the variation to trouble the Indian batsmen.

They attacked him at will and defended when they found it necessary.

The lack of pace also became a factor and the pitch on which Indian pacers looked menacing, Bangladesh’s medium pacers merely went through the motions.

Each boundary left their shoulders dropping further and by the time Agarwal was out trying to hit his ninth six, the visitors had resigned to the fate that the remainder of this Test match will now be a mere formality.