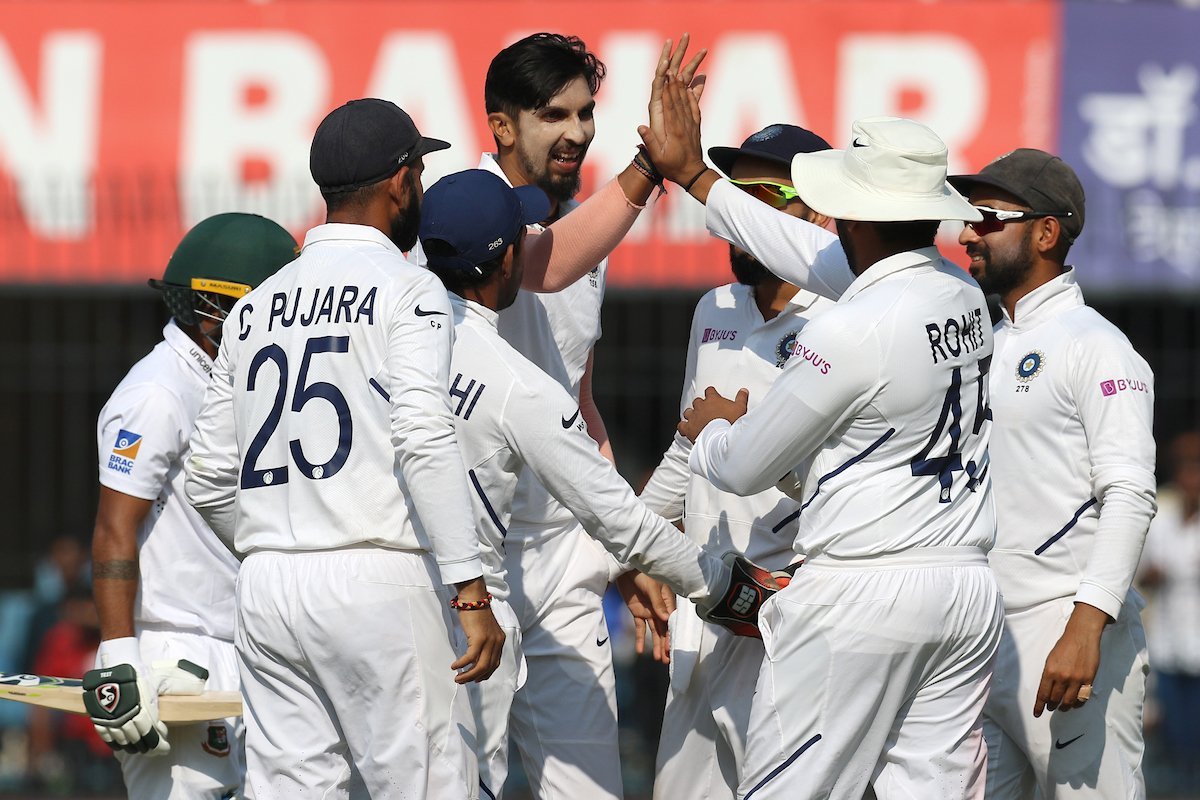 Indore: India’s pace troika was at its menacing best against an under-confident Bangladesh, helping the home team seize control of the first Test here on the opening day itself.

On one of the bounciest tracks in recent times, Bangladesh were bundled out for 150 in 58.3 overs, lasting barely two sessions and a few overs more here on Thursday.

With ample time at their disposal, India ended the day at 86 for 1 in 26 overs, losing Rohit Sharma’s (6) wicket to Abu Jayed.

The first day’s proceedings starkly highlighted the gulf between world’s No.1 and No.9 Test sides.

A luckless Ravichandran Ashwin (2/43 in 16 overs), let down by Ajinkya Rahane in the slips cordon, also had a couple of clean-bowled dismissals in his kitty in the post-lunch session.

The three Indian pacers consistently bowled at 140 kmph, with seam, swing and bounce making life miserable for Bangladeshi batsmen. Each of the three displayed different qualities and it was evident from the manner of dismissals.

The fans are enjoying themselves at the Holkar Stadium. Where are you watching the game from?#INDvBAN pic.twitter.com/KCl50Q4IWL

Ishant’s bowling was about disconcerting bounce from length that had opener Shadman Islam caught behind and the occasional fuller delivery holding its line that forced Liton Das to edge one to Virat Kohli in the slips.

For Umesh, it started with brisk pace and getting it to seam into other opener Imrul Kayes and making him expect more incoming deliveries. Just when Kayes was getting used to a pattern, Umesh produced away going deliveries for the left-hander, squaring him up and the edge flew to slips.

He again came in the post-tea session during which the tailenders looked scared, retreating towards square leg in fear of getting hurt.

Mohammed Shami, probably the craftiest among the contemporary Indian pacers, showed there is no one better when it comes to getting reverse swing with 50-over old SG Test ball.

Mushfiqur Rahim (43), Bangladesh’s top scorer, who led a charmed life and was dropped twice, didn’t have a clue when one swung back to knock the stumps back after he was beaten by away going deliveries.

The next one by Shami swung even more as Mehidy Hasan Miraj (0) was adjudged leg-before although a DRS call could have saved him had he opted for one.

In the first session, Shami had dismissed Mohammed Mithun with conventional inswing.

Even without Jasprit Bumrah, who is nursing a stress fracture, the unit looked so formidable that one could sympathise with Bangladeshi batsmen facing their combined might.

They attacked relentlessly and it didn’t matter that India weren’t exactly having a great day as far as slip catching was concerned. Umesh could have got Mushfiqur early had Kohli latched on to one in the third slip.

Ashwin had both Mushfiqur and Mahmudullah Riyad dropped by Rahane at first slip.

It didn’t cost the team much but the frustrated bowler then decided that breaching the defence was the best option as Mominul Haque (36) and Mahmudullah were dismissed due to poor judgement and shot selection respectively.

First he angled one to left-hander Mominul, who thought it will be a conventional off-break and decided to leave the delivery.

To his horror, it came in with the angle to peg the off-stump back.

Mahmudullah was lucky when Rahane dropped a regulation catch at slips but a rank bad shot brought about his downfall.

The right-hander tried to sweep Ashwin from outside the off-stump and in the process was bowled round the legs, leaving all three stumps exposed.