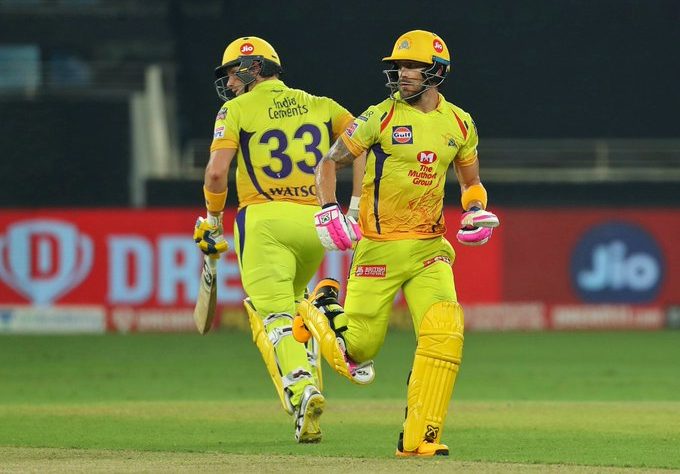 Chasing a moderate target of 179, CSK openers handed a comfortable win as they had an unbeaten partnership of 181 runs. The duo smashed Punjab bowlers all around the ground.

Meanwhile, the duo also broke the highest opening stand record of 159-run previously set by Mike Hussey and Murali Vijay for the CSK in 2011.

MS Dhoni adds another feather to his cap.

Gets to 100 catches as a wicketkeeper in the IPL 👏👏#Dream11IPL pic.twitter.com/FWNd6Y7FvP

Plessis smashed 87-run off 53 balls while Watson played a knock of 83 runs studded with three sixes.
This is also the second-highest 10-wicket chase in the history of the tournament.

Earlier, Punjab skipper KL Rahul scored a half-century to guide his team to a total of 178. Rahul played a knock of 63 runs from 52 balls.

After opting to bat first, KXIP got off to a brilliant start, with openers Mayank Agarwal and Rahul smashing regular boundaries. The duo formed a 61-run partnership before Piyush Chawla dismissed Agarwal (26) in the ninth over.

Mandeep Singh then came out to bat and played a quick knock of 27 runs from just 16 balls before Ambati Rayudu caught a stunning catch to send batsman back to the pavilion. Ravindra Jadeja took the wicket of Singh in the 12th over.

Can there be a better person than #MSDhoni to analyse the game. We absolutely love these post-match interactions. #Dream11IPL #KXIPvCSK pic.twitter.com/a2foU7eyGx

Nicholas Pooran then joined the on-field batter Rahul, who went on to complete his half-century from 46 balls. Both batsmen played with an attacking mindset and took the team over the 150-run mark in the 17th over.

However, CSK made a comeback in the match as Shardul Thakur removed both the set batsmen in the 18th over. Pooran got out after scoring 33 runs from 17 balls before Rahul was caught behind on the very next delivery.

After taking two wickets, Thakur conceded just three runs from his remaining four deliveries of the over.

Glenn Maxwell and Sarfaraz Khan then took the field and helped the team reach a respectable total. Thakur took two wickets while Chawla and Jadeja picked one wicket each in the match.

CSK will now play against Kolkata Knight Riders in Abu Dhabi on October 7 while Punjab will take on SunRisers Hyderabad in Dubai on October 8.