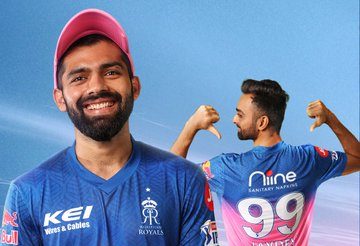 Dubai: Rajasthan Royals has unveiled their new jersey for the 2020 season of the Indian Premier League (IPL) in dramatic fashion.

The franchise teamed up with Red Bull Skydiving and wingsuit athlete Dani Roman, who skydived and descended down to the One & Only Resort, Royal Mirage, in Dubai to hand the RR players their new jerseys.

In the video shared by the franchise, the Spanish skydiving athlete could be seen jumping out of a plane, several thousand feet above the Palm Islands, carrying with him a Rajasthan Royals bag.

Flying over the players as he left a strew of smoke through the air, he parachuted onto the beach and dropped off a bag full of jerseys for the players to grab.

“Our mornings are generally very quiet but today it turned around totally with us being asked to head to the beach for a surprise,” said Royals all-rounder David Miller, who is one of the players to have featured in the video.

“It was such a great view to see someone jumping off a plane and land to deliver our jerseys for the season. I have myself experienced skydiving in Dubai a couple of years back, and today’s show brought back a lot of memories,” he said.

The 2020 season of the IPL starts on September 19. Royals will face Chennai Super Kings in their first match in Sharjah on September 22.

It's time to #HallaBol, in our official matchday jersey for #IPL2020 💗

Here's how the Royals met their colours for this season! 👇😎#RoyalsFamily | @redbullindia