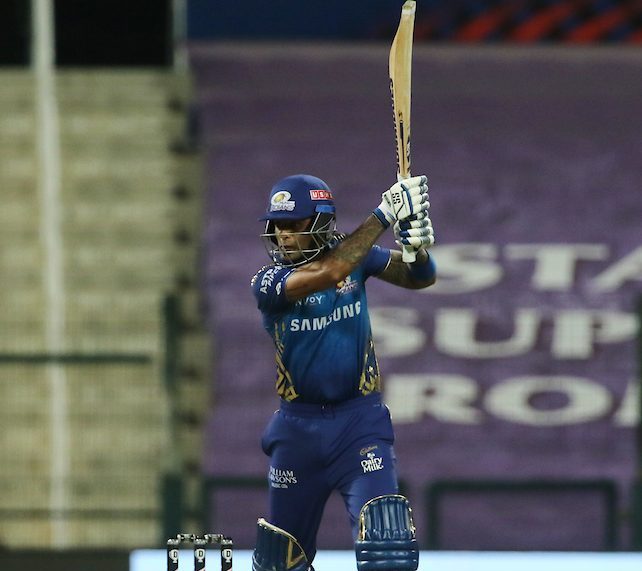 Abu Dhabi: Mumbai Indians (MI) on Wednesday took a two-point lead at the top of the Indian Premier League (IPL) table with a five-wicket win over Royal Challengers Bangalore (RCB).

Jasprit Bumrah’s heroics with the ball restricted RCB to 164/6 wickets after which Suryakumar Yadav led his team to victory with an unbeaten 79 off 43 balls at the Sheikh Zayed Stadium.

Suryakumar hit the winning runs with a four and took MI to victory with five balls to spare. He hit 10 fours and three sixes in his innings. He anchored the innings after walking into the middle in the sixth over, notably putting up a 51-run stand with Hardik Pandya for the fifth wicket that all but sealed the win for MI.

Kieron Pollard faced just one ball after Pandya’s dismissal, which he dispatched for four and thus left his team needing just three to win off the last over.

Earlier, were off to a strong start with openers Devdutt Padikkal and Josh Philippe putting up a partnership of 71 runs in 47 balls. Padikkal then struck up useful partnerships with RCB captain Virat Kohli and AB de Villiers but the team went into a tailspin after the latter’s dismissal.

de Villiers looked like he was on his way to a big score before MI’s stand-in captain Kieron Pollard dismissed him in the 16th over. Bumrah was then brought back for the 17th and the over ended up being a double-wicket maiden as he got Shivam Dube and the big wicket of Padikkal in the over.

Boult then dismissed Chris Morris in the 18th over after which Gurkeerat Mann Singh and Washington Sundar took RCB beyond the 160-run mark.