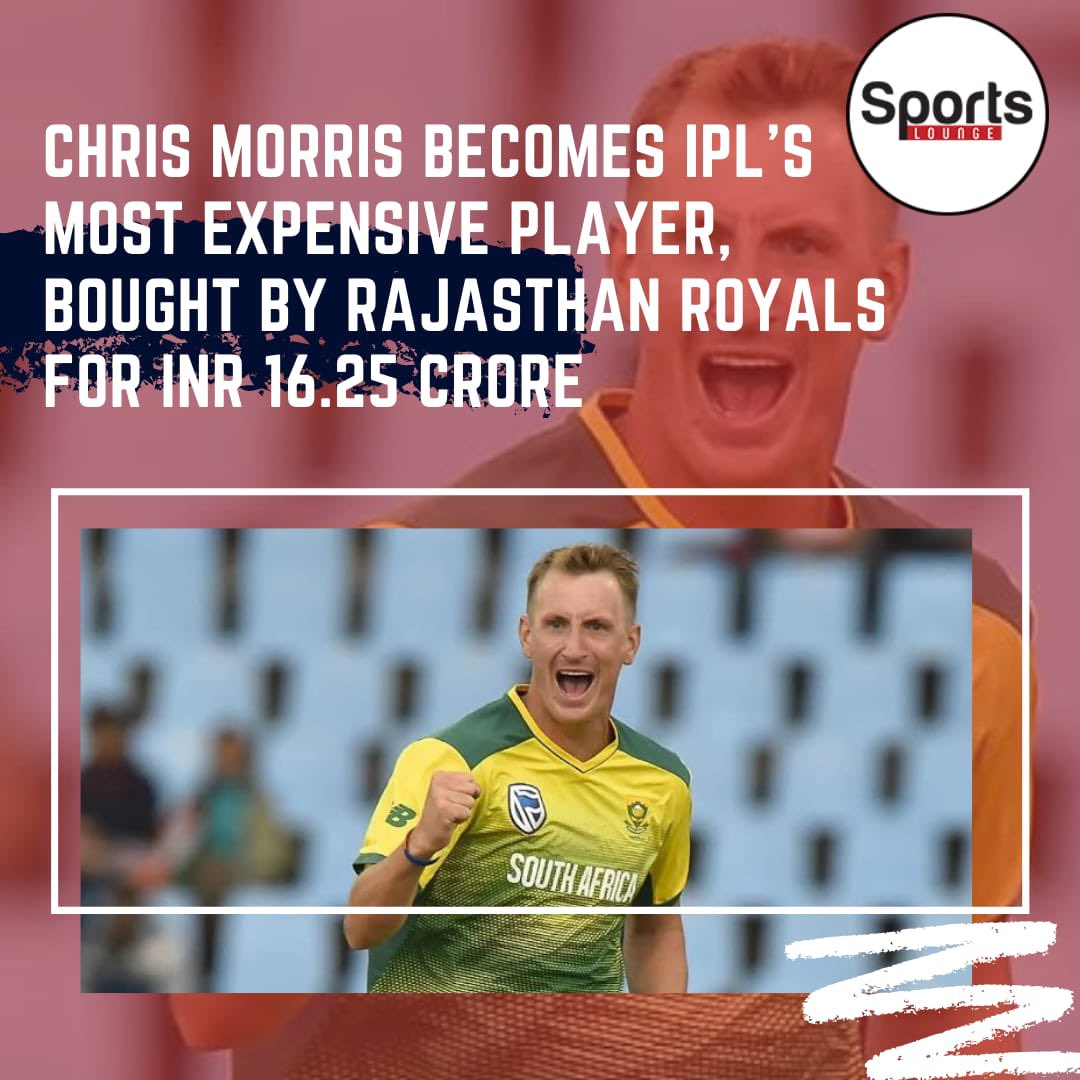 Chennai: Chris Morris on Thursday fetched 22 times his base price (Rs.75 lakh) for the highest-ever bid of Rs.16.25 crore in the Indian Premier League (IPL) history as Rajasthan Royals (RR) picked the South African fast bowling all-rounder after an intense bidding war with Punjab Kings at an auction here.

Yuvraj Singh had held the previous all-time record with Rs.16 crore, which Delhi Daredevils had paid him in 2015. And the highest ever bid for a foreigner was Rs.15.5 crore, which the Kolkata Knight Riders paid to buy Australian fast bowler Pat Cummins last year.

Morris, 33, who bagged 11 wickets in nine matches for Royal Challengers Bangalore (RCB) in 2020 IPL, shattered both records in one shot.

In all, eight franchises spent Rs.145.30 crore to buy 57 players, including 22 from overseas, at the auction that, as expected, turned out to be a bowler-friendly one. Five of the top eight buys being either bowlers or bowling all-rounders.

IPL is likely to be played in India and begin in April, after the ongoing home series against England.

Maxwell, 32, was earlier released by Punjab Kings — earlier called Kings XI Punjab — who had bought him for Rs. 10.75 crore for the 2020 edition.

Australia’s uncapped pace bowler Riley Meredith (base price: Rs 40 lakh) went to Punjab Kings for Rs 8 crore in what was a 20-time jump from his base price.

“Yes, we know we paid a high price [for Morris]. But we were looking for a specific role. We wanted to strengthen the middle-order. He provides value with both bat and ball. His numbers with the ball are great across IPLs,” he said.

RCB head coach Mike Hesson pointed to the fine form Maxwell is in.

“He’s a multi-skilled player, he’s good in the field and is able to bowl off spin, so just depends on what teams want. We all know what good touch he is in away from the IPL. Only a couple of years ago in 2017 he was used higher up the order and had his best IPL, so we’ll look at how we best use him…help AB [de Villiers] out and provide a bit of power through the middle there. We’ve obviously got other players to do other jobs, so we were after that X-factor player and we’ve found that in Glenn Maxwell, so we’re delighted,” he said.

England’s off-spinning all-rounder Moeen Ali, who just a few days ago played the second Test against India in Chennai, went to CSK for Rs 7 crore. His reserve price was Rs 2 crore.

Indian domestic players also hit gold, with Tamil Nadu youngster Shahrukh Khan, who impressed with his hard-hitting in the T20 Syed Mushtaq Ali Trophy, being bought by Punjab Kings for Rs.5.25 crore — over 26 times his base price of Rs.20 lakh.

Krishnappa Gowtham, Karnataka’s off-spinner and lower-order batsman, was bought for Rs 9.25 crore by Chennai Super Kings. His reserve price was Rs.20 lakh as he went over 45 times his base price.

India all-rounder Shivam Dube, who was released by RCB, was bought by RR for 4.4 crore. His base price was Rs.50 lakh. RR also bought 22-year-old Saurashtra bowler Chetan Sakariya for Rs 1.2 crore.

Former India off-spinner Harbhajan Singh, who was released by Chennai Super Kings before the auction, was bought by Kolkata Knight Riders for his base price of Rs.2 crore.

List of sold and unsold cricketers at IPL auction