IPL 2021: Jaiswal and Dube take Rajasthan to a cruising win over Chennai 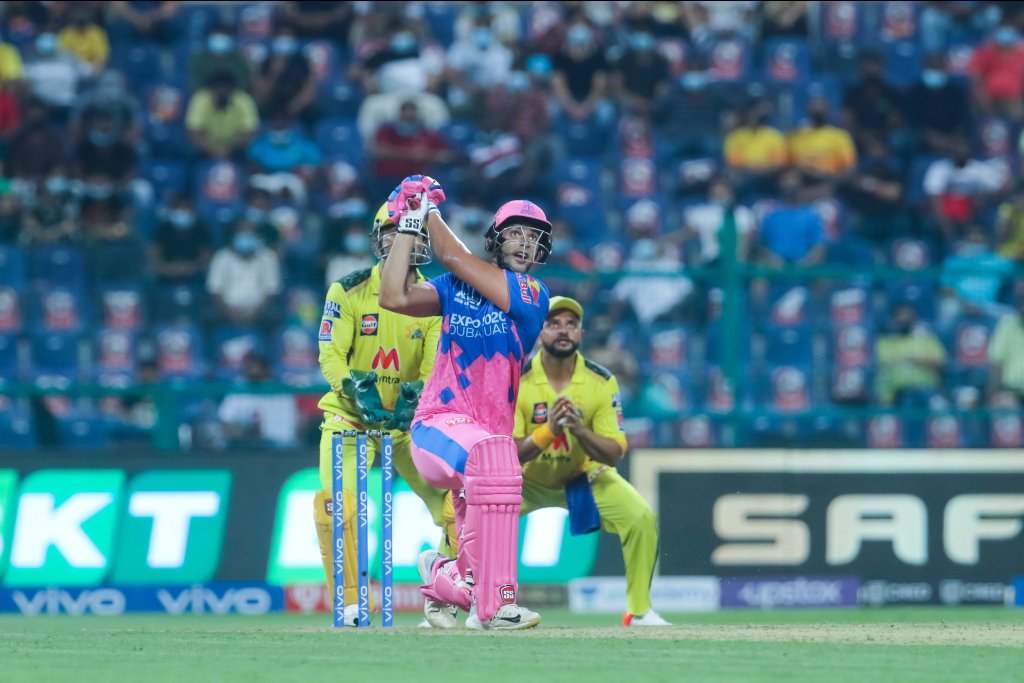 Abu Dhabi: Yashasvi Jaiswal and Shivam Dube hit blazing half-centuries to lead Rajasthan Royals to a splendid seven-wicket win over Chennai Super Kings in match 47 of IPL 2021 at Sheikh Zayed Stadium here on Saturday. Rajasthan made an imposing chase of 190 look easy by hunting down the target with 15 balls to spare.

The win means that Rajasthan now have ten points from 12 matches and leapfrog Mumbai Indians to be at sixth place in the points table which has four teams at ten points.

Rajasthan got off to a flying start, making 81 runs in the power-play against a Chennai bowling attack missing Deepak Chahar and Dwayne Bravo. Yashasvi Jaiswal came out all guns blazing, smashing boundaries against every bowler. Josh Hazlewood came under severe thrashing from the youngster, taken for seven boundaries, including the last one, a flat-six over long-off, taking him to a whirlwind half-century in just 19 balls.

Evin Lewis supported Jaiswal well before pulling to fine leg off Thakur. Jaiswal fell on the first ball after power-play to a short ball from KM Asif. Despite losing both openers in quick succession, Rajasthan didn’t lose the run-making assault.

Shivam Dube and Sanju Samson put up a match-defining partnership of 89 runs in 58 balls. Dube, promoted to number four, was more aggressive of the duo, welcoming Ravindra Jadeja with a six over long-on in the ninth over. He extended the thrashing by hitting Moeen Ali for back-to-back sixes in the next over.

Dube brought the half-century of the partnership with a four clubbed over mid-wicket off Sam Curran followed by a six over the same region in the 12th over. The all-rounder then reached his half-century in 31 balls with a single off Thakur.

Though Samson fell while pulling off Thakur in the 16th over, Rajasthan were well on course to chase the target. Debutant Glenn Phillips walloped Curran for a four and six, before finishing off the chase with a single off Moeen Ali.

Earlier, Gaikwad displayed an exhibition of timing and classical hitting to reach his first century in the IPL. It was a fine batting effort by the youngster, whose first 50 runs came in 43 balls while the next 51 runs came in a jaw-dropping 17 balls and feasted ‘n Rajasthan’s listless bowling. Gaikwad was well-supported by Ravindra Jadeja’s blitzkrieg in the end apart from useful contributions by Faf du Plessis and Moeen Ali.

Gaikwad and Faf du Plessis added 44/0 in power-play. While Gaikwad creamed debutant Akash Singh for two fours in the opening over, du Plessis took back-to-back boundaries against Chetan Sakariya in the fifth over. Tewatia broke the partnership in the seventh over, getting du Plessis easily stumped by Samson. Tewatia had his second wicket of the match as Suresh Raina’s promotion to three in his 200th match for Chennai ended with a slog-sweep to deep mid-wicket.

Despite the two quick dismissals, Gaikwad and Ali struck boundaries and rotated the strike to keep the scoreboard ticking. Gaikwad brought up his half-century in 43 balls, his second of the UAE leg of the tournament. From there, Gaikwad accelerated, hitting Tewatia for two sixes on the trot in the 15th over.

Though Tewatia had Ali stumped, it didn’t make Gaikwad slow down. In the next over, he took two fours and a six off Akash Singh to enter into the 80s. Though Ambati Rayudu fell cheaply, Gaikwad continued to collect boundaries with pristine timing.

Jadeja took two fours and a six on the first three balls of the final off Rahman. Gaikwad finished off the innings by smacking a six over deep mid-wicket, which took him to his first IPL hundred. But it wasn’t enough to prevent Chennai’s first loss in the UAE leg of the tournament.