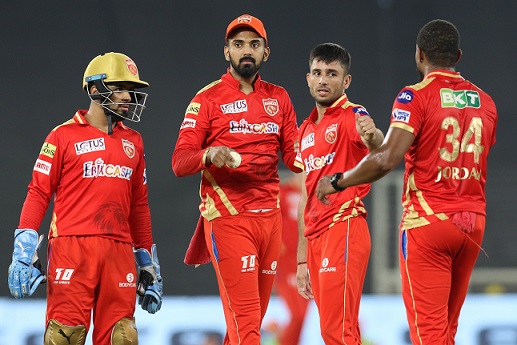 Ahmedabad: Left-arm spinner Harpreet Brar had a dream first match in this season’s Indian Premier League (IPL) as he picked up the wickets of Virat Kohli, Glenn Maxwell and AB de Villiers to help Punjab Kings (PBKS) romp to a 34-run win against Royal Challengers Bangalore (RCB) at the Narendra Modi Stadium on Friday night.

Brar, who had played only three IPL matches before Friday, scalped 3/19 in his four overs to run through the power-packed RCB middle-order.

Before that, Australian pacer Riley Meredith had dealt the first blow to RCB by sending opener Devdutt Padikkal’s off-stump flying.

Kohli (35) and Rajat Patidar (31) then took their time and added 43 for the second wicket to set the platform for Maxwell and de Villiers. However, Brar spoiled all the plans.

He first removed Kohli, who looked to charge down the wicket but missed the line as the ball kept low. Then the tweaker from Moga spun one to beat Maxwell and hit the top of his off-stump. In the next over, he had de Villiers caught at cover.

RCB were suddeenly reduced to 69/4, needing 111 runs off 47 balls, which proved too much for the lower order batsmen.

At one stage, PBKS looked like struggling to put up a competitive total, but Rahul’s onslaught helped the team amass 40 runs in the last two overs of Harshal Patel which saw them post a challenging target.

The Punjab franchise had lost opener Prabhsimran Singh (7) early before Chris Gayle (46 off 24 balls) and Rahul took charge. Gayle’s knock comprised six fours and two sixes and took the team’s score to 99 in the 11th over. After Gayle’s dismissal, PBKS lost three quick wickets which set them back and threatened to restrict the team to under 150.

However, Rahul and Brar (25 not out off 17 deliveries) then put up an unbeaten stand of 61 runs for the sixth wicket that took PBKS to their eventual score. Brar hit two sixes off Patel.

‘I am fit, I can bat and I can bowl’: Shoaib Malik shrugs off retirement rumours