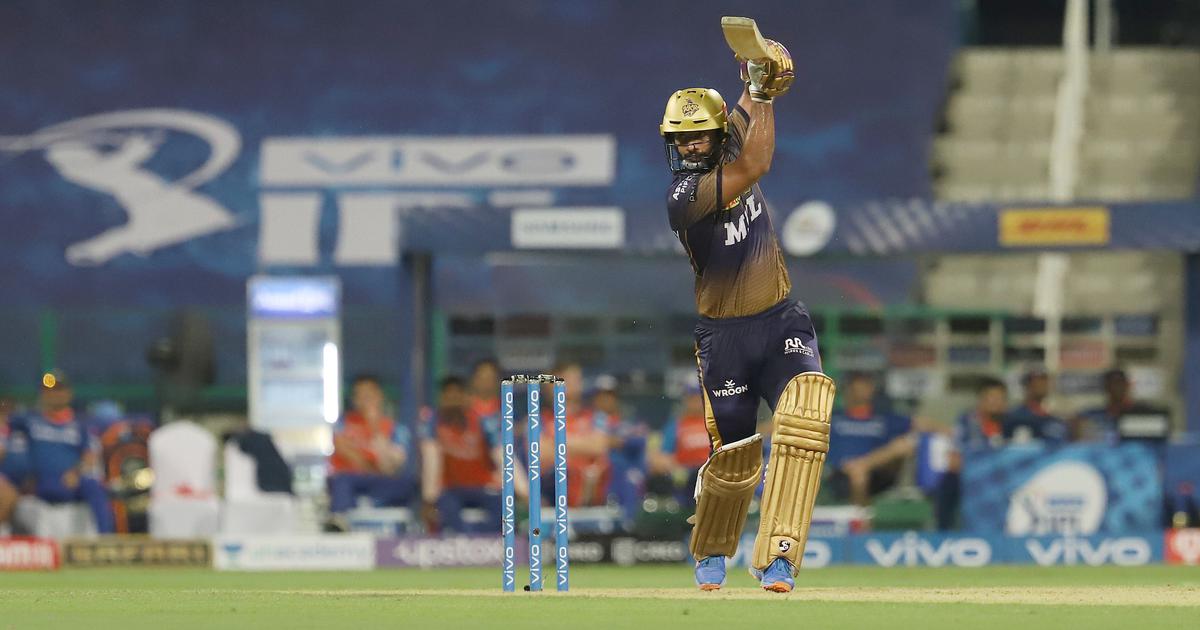 Rahul Tripathi and Venkatesh Iyer starred as Kolkata Knight Riders produced a clinical performance for the second successive game since the Indian Premier League’s resumption to beat Mumbai Indians by seven wickets and enter the top four in the points table in Abu Dhabi on Thursday.

Quinton de Kock struck an entertaining 55 for MI before KKR bowlers bounced back in the last 10 overs, conceding 75 runs and taking five wickets.

Shubman Gill and Iyer gave KKR another flying start with the first two overs bowled by Trent Boult and Adam Milne going for 15 runs each.

Gill flicked Boult for a delightful six while Iyer pulled the New Zealand pace spearhead to set the tone for the rest of the innings.

While Jasprit Bumrah rattled Gill’s stumps in the third over, Iyer went on to play a fine knock comprising four boundaries and three sixes.

Iyer and Tripathi shared an 88-run stand for the second wicket which completely shut the door on MI, who suffered their second loss since IPL’s resumption.

Earlier, MI skipper Rohit Sharma (33 off 30) got a start but couldn’t get going when he needed to up the ante. All-rounder Hardik Pandya did not start once again, raising questions about his fitness.

Rohit took the attack to spinner Varun Charkravarthy with two consecutive fours in opening two deliveries of the fourth over. De Kock was not to be left behind as he pulled a Lockie Ferguson delivery over the fence for the first maximum of the match.

Introduced into the attack in the sixth over, Prasidh Krishna was taken to task by de Kock, hitting the pacer twice over the fence to pick up 16 runs from his first over as MI got to 56/0.

De Kock looked solid as he welcomed Andre Russell with consecutive fours. Morgan bowled out Chakravarthy by the 11th over (4-0-22-0) with MI not losing a wicket against him. Sunil Narine was also tidy giving away only 20 runs in four overs.

With de Kock attacking, Rohit played second fiddle before Narine dismissed him for the ninth time in T20s, holing out to Gill at the boundary.

KKR pulled things back between 10-15 overs, conceding only 26 runs and picking up two wickets.

Pollard gave MI a push in the last five overs, including a flat-batted six over mid wicket in Krishna’s 18-run over.

But Ferguson bowled a brilliant last over for KKR, removing the dangerous duo of Pollard and Krunal Pandya (12) for just six runs. MI collected 49 runs from the last five overs.