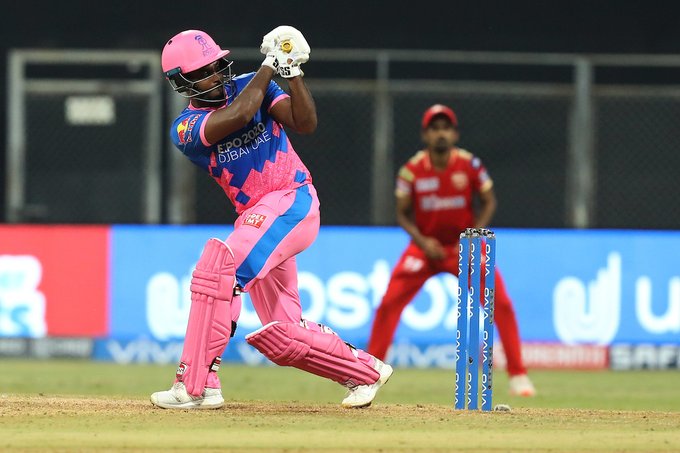 Mumbai: Sanju Samson (119 off 63 balls) scored a hundred on his Indian Premier League (IPL) captaincy debut but couldn’t take Rajasthan Royals (RR) past the finish line, getting dismissed off the last of the match as his team lost to Punjab Kings (PK) by four runs at the Wankhede Stadium on Monday night.

RR looked very much in the game throughout as Samson brought the equation down to 5 runs off two balls. However, he refused to take a run on the second last ball after he had hit it to deep extra cover which could have fetched them a run, even a double.

Instead, he eyed a glory shot for six on the last ball, but holed out to deep extra cover as his side fell short by four runs.

RR had got off to a worse possible start, losing their power-hitting all-rounder Ben Stokes to Mohammed Shami in the first over of the innings. Soon Manan Vohra, the other opener was sent back, leaving the Jaipur franchise at 25 for two in the fourth over.

What followed though was an imperious show of batting from Samson as he clobbered seven sixes and 12 fours to take the game to the wire.

He built a couple of half-century partnerships with Shivam Dube and Riyan Parag and one of 45 with Jos Buttler to keep his team in the match.

Punjab Kings, who lost opener Mayank Agarwal early, saw Rahul and Chris Gayle add 67 for the second wicket with the West Indian batsman being the dominant partner as he gave his side the initiative.

Gayle’s 28-ball 40 comprised two sixes and four fours as he became the first batsman to hit 350 sixes in the history of Indian Premier League.
Gayle’s dismissal off Riyan Parag would have given hope to the Rajasthan franchise but then Hooda and Rahul pounded sixes.

Overs 13 and 14 bowled by Shivam Dube and Shreyas Gopal went for 20 each and saw six sixes, five of those coming of Hooda’s bat.

The hammering didn’t end there. After a couple of overs that went for 11 each, Punjab Kings took 15 off Chetan Sakariya, who had got the early wicket of Mayank Agarwal.

Even in the 18th over, when Rajasthan Royals got rid of Hooda and Nicholas Pooran, the Punjab franchise managed to get 14 runs.

Then came 15 off Mustafizur Rahman’s fourth over, the innings’ 19th.

Young Saurashtra left-arm pacer Sakariya got two wickets in his last over and conceded just five runs to finish as the most successful Rajasthan Royals bowler with three wickets for 31 runs in his four overs.