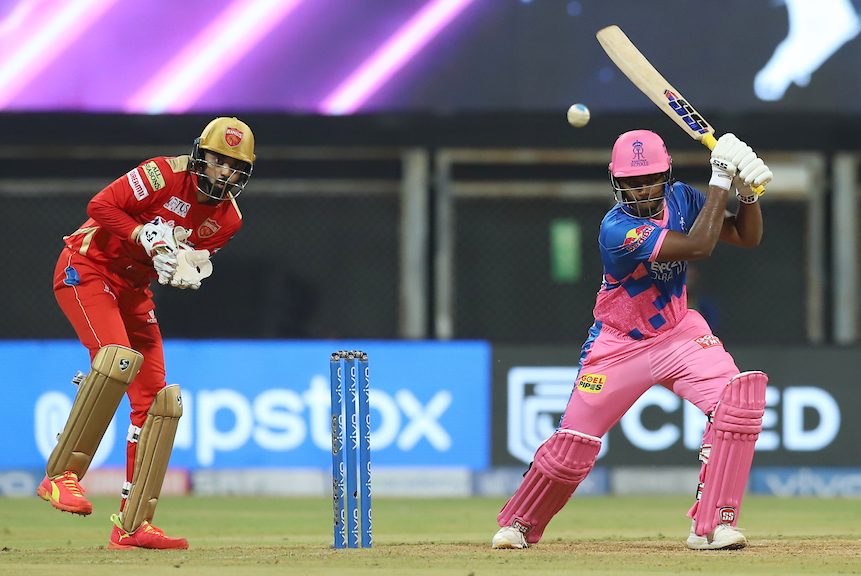 Mumbai: Punjab Kings defeated Rajasthan Royals by four runs in a thrilling IPL match that saw Sanju Samson scoring a cracking century but still ending up on the losing side on Monday.

Earlier, a 105-run partnership for the third wicket in just 46 balls between skipper K.L. Rahul and Deepak Hooda helped Punjab Kings post 221/6 in their 20 overs against Rajasthan Royals here at the Wankhede Stadium on Monday.

Punjab Kings, who lost opener Mayank Agarwal early, saw Rahul and Chris Gayle add 67 for the second wicket with the West Indian batsman being the dominant partner as he gave his side the initiative.

Gayle’s 28-ball 40 comprised two sixes and four fours as he became the first batsman to hit 350 sixes in the history of Indian Premier League.
Gayle’s dismissal off Riyan Parag would have given hope to the Rajasthan franchise but then Hooda and Rahul pounded sixes.

Overs 13 and 14 bowled by Shivam Dube and Shreyas Gopal went for 20 each and saw six sixes, five of those coming of Hooda’s bat.

The hammering didn’t end there. After a couple of overs that went for 11 each, Punjab Kings took 15 off Chetan Sakariya, who had got the early wicket of Mayank Agarwal.

Even in the 18th over, when Rajasthan Royals got rid of Hooda and Nicholas Pooran, the Punjab franchise managed to get 14 runs.

Then came 15 off Mustafizur Rahman’s fourth over, the innings’ 19th.

Young Saurashtra left-arm pacer Sakariya got two wickets in his last over and conceded just five runs to finish as the most successful Rajasthan Royals bowler with three wickets for 31 runs in his four overs.

.@rajasthanroyals Captain @IamSanjuSamson wins the toss and elects to bowl first against #PBKS.