New Delhi: Coming into Thursday’s Indian Premier League (IPL) clash against Mumbai Indians on the back of three consecutive away wins, Delhi Capitals were expected to make a match of it at the Feroz Shah Kotla.

But perhaps unsurprisingly, Delhi ‘s woes at their home ground continue to haunt them.

In what was a battle for the second spot on the points table, Mumbai dominated with both bat and ball to trump Delhi by 40 runs.

Delhi are third with 10 points, the same as fourth placed Kings XI Punjab. But the team from the capital are ahead on net run rate.

Opting to bat first on winning the toss, Mumbai rode strong batting by Pandya brothers Hardik and Krunal to post a challenging total of 168/5.

Their batsmen struggled to come to terms with the pace and bounce of what is supposed to be their home pitch.

Chasing a difficult target, Delhi had started on a confident note with openers Shikhar Dhawan and Prithvi Shaw adding 49 runs between them in 6.3 overs.

But Dhawan’s dismissal in the seventh over stopped the hosts’ momentum in its tracks. 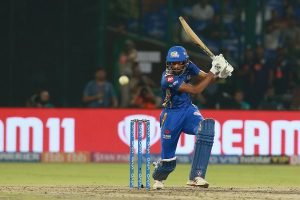 Rahul Chahar was the most successful among the Mumbai bowlers. The spinner had conceded 10 runs in his first over – the second of the Delhi innings. But he made a superb comeback in his second spell to sink the hosts’  chase with figures of 3/19.

When Jasprit Bunrah sent Rishabh Pant’s off-stump cartwheeling in the 14th over, Delhi’s hope of a comeback had all but ended.

Hardik smashed 32 off just 15 balls before miscuing one from Kagiso Rabada to hand an easy skier to Rishabh Pant.

Hardik’s brother Krunal also shone with the bat, scoring a quick 37 off 26 balls.

The visitors were handed a good start with Rohit Sharma and Quinton de Kock putting on an opening partnership of 57 runs in the first six overs.

But the Delhi bowlers hit back with three wickets in the next four overs to peg back the scoring rate.

Rabada was the most successful among the Delhi bowlers with figures of 2/38.

Leg-spinners Amit Mishra and Axar Patel took one wicket each.