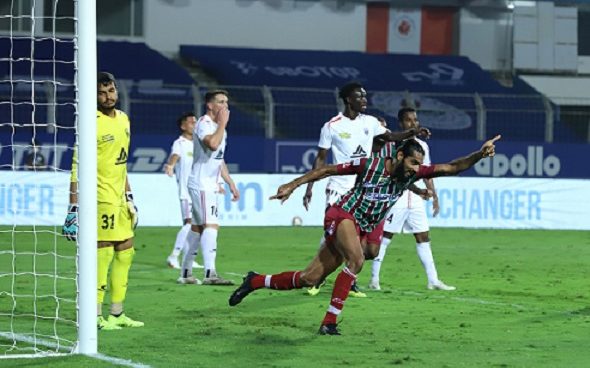 Krishna’s 51st minute header and an own goal from Benjamin Lambot six minutes helped ATKMB to 20 points from nine games.

NorthEast United are at six spot with 11 points.

Earlier, SC East Bengal finally made the right moves to beat a lacklustre Odisha FC 3-1 and secure their first win in their maiden Indian Super League season here on Sunday.

In the basement battle, the Red-and-Gold scored through Anthony Pilkington (12th) and Jacques Maghoma (39th) to give them a 2-0 cushion at half time at the Tilak Maidan.

The Kolkata heavyweights maintained their high intensity before their latest Nigerian recruit Bright Enobakhare sealed the issue with a terrific 88th minute strike.

Odisha FC (two points) pulled one back through Diego Mauricio in the injury time (90+3rd minute), but it was not enough as they suffered a sixth defeat to remain at the bottom of the 11-team table, winless in last eight matches.

SCEB’s win in their maiden ISL season came in their eighth match as they climbed to ninth place ahead of Kerala Blasters with six points, while Odisha remained winless.

An evening full of joy for @sc_eastbengal 🎇

It was new signing Raju Gaikwad, who initiated the goal-scoring move with a nice long throw-in near the post.

The ball bounced in towards the far post where Pilkington capitalised on a defensive lapse to rise above the man at the far post before calmly heading it in.

The goalkeeping, too, was spot on from Debjit Majumder who effected a couple of spectacular saves to ensure they retained their lead.

East Bengal went on to double their lead with Matti Steinmann providing the assist to Maghoma who made a powerful run and got past two OFC defenders before making a fine finish from an acute angle.

Luck, too, eluded the Odisha team on more than one occasion and, in the 57th minute, Jerry’s shot from an Onwu assist hit the upright.

In the 61st minute, Jacob Tratt’s header bounced to beat the SCEB goalkeeper Majumder but not the woodwork.

Fowler pressed Enobakhare in place of Maghoma in the 73rd minute and the 22-year-old Nigerian scored on his debut in what was a fine team effort by the SCEB forwards.

Serie A: Martinez in hat-trick sends Inter Milan to top