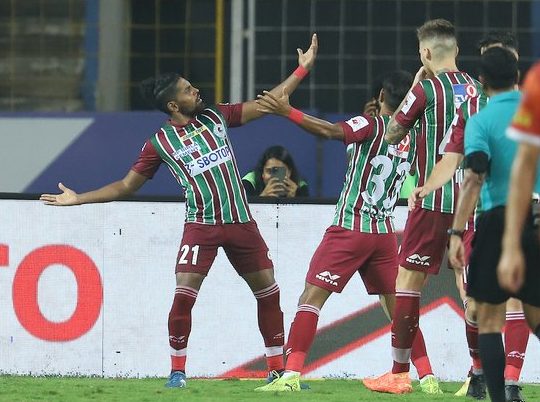 Margao: Roy Krishna won and converted a penalty to carry ATK Mohun Bagan to a 1-0 win over FC Goa in the Indian Super League (ISL) on Wednesday.

Krishna scored from 12 yards, his fifth of the campaign, in the 85th minute to lift Bagan to second on the standings with 13 points after six matches.

It was Bagan’s first win in three matches that pegged Goa at sixth spot with eight points.

Bagan’s defensive co-ordination and strategy to deny Goa space and time on the ball paid dividends in the goalless first half. They stifled Goa’s offensive play and were a threat on the break, David Williams twice getting into opportune positions.

At first, Williams made a clever run into the box in behind the Goa defence and was picked up by Pranay Halder. But the Australian was unable to make a proper connection with the ball.

Goa got a look-in behind the Bagan defence for the first time in the 80th minute when Igor Angulo fed Ortiz inside the box. Ortiz theatrically went down inside the box and Goa vehemently appealed for a penalty only to be waved off by the referee.

But he happily pointed to the spot five minutes later when Roy Krishna lulled Aibabbha Dohling into a challenge and tripped over. Then picked himself up and slotted home the penalty to put his team ahead.

Goa came close to equalising in the dying stages of the game when Savoir Gama’s rasping drive was tipped over by Bagan keeper Arindam Bhattacharya.

Edu Bedia headed the following corner but it went agonisingly wide for Goa.

La Liga: Barcelona come from behind to beat Real Sociedad in ‘best game of season’