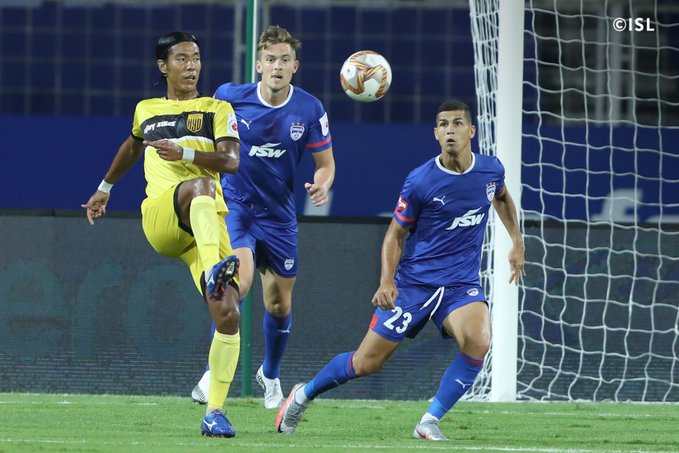 Panaji: Hyderabad FC and Bengaluru FC played out a drab draw in their Indian Super League Season 7 encounter at the Fatorda Stadium, on Saturday.

The Nizams recorded their second successive clean sheet, grabbing four points in two outings — their best start in the league.

However, it was a frustrating evening for Bengaluru FC, who are yet to taste a win this season.

While Carles Cuadrat fielded an unchanged eleven from their 2-2 draw against FC Goa, Hyderabad coach Manuel Marquez made two changes to his line-up from the win against Odisha.

Chinglensana Singh and Joel Chianese came in for Hitesh Sharma and Mohammed Yasir.

BFC had their first attempt in attack in the fifth minute as Ashique Kuruniyan tried his luck from a distance but his effort took a deflection before being collected by Subrata Paul.

The Nizams’ continuous flow in Bengaluru’s attacking area and their defensive structure meant Bengaluru struggled to take the ball up to their attacking trio of Sunil Chhetri, Kristian Opseth and Udanta Singh.

Bengaluru, as is their strategy usually, engaged in long-range shots, which proved futile.