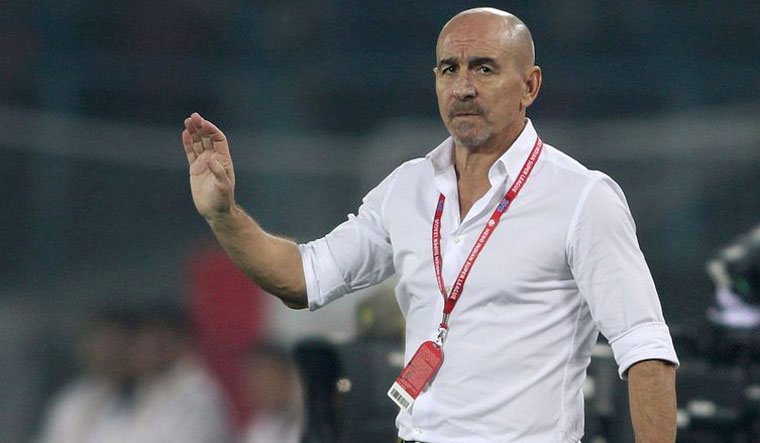 In the post-match press conference, ATKMB Head coach Antonio Lopez Habas appreciated his side’s effort against the Kochi-based club at the GMC Stadium in Bambolim on Friday.

“It is very difficult to compete well after a long period of time away from the game. But this is football. The team played fantastic during the game. Now we have to think about the game against SC East Bengal and we will prepare by training every day,” Habas said.

Analysing the game from ATKMB’s point of view, Habas said: “We had to correct the situation of the central midfielders and the strikers. After the substitution [of Pronay Halder with Manvir Singh], we improved. We had to press the opponents and I feel this result is good for us. Kerala played well but I am very happy with the three points today.”

Michael Soosairaj found himself being stretchered off the pitch in the first half after a collision with Kerala defender Prasanth Karuthadathkuni and Habas was sympathetic. “We have to wait to understand the problem with Soosairaj. We will give all the support to Soosairaj to help him recover as soon as possible.”

Meanwhile, despite getting no points from the match, Kerala Blasters head coach Kibu Vicuna was satisfied with the way his team played and singled out the areas where they needed improvement.

“Our plan for the game was very clear. We are happy with the performance of the team. Unfortunately, we lost because of that goal. We had some chances to score but we didn’t convert so now we have to focus on the next game. We have to improve in the final third. Our attackers and midfielders didn’t participate too much in the final third. So we have to try to improve this aspect of the game,” he said.

Many fans expected Nishu Kumar to slot into the right-back position but it was Karuthadathkuni who got the nod ahead of the newcomer. Talking about his team selection, Vicuna said, “Prasanth can play in that position. Today he had a good game. He can play as a right-back when required. Nishu Kumar is an important player for us but he had some problems in the pre-season. When he is 100%, I’m sure he is going to be an important player for us.”

Kerala Blasters return to the GMC Stadium to take on NorthEast United FC on November 26 in their second game of the season, while ATK Mohun Bagan face off against SC East Bengal at the Tilak Maidan Stadium in Bambolim in the much-awaited Kolkata Derby on November 27.

Best FIFA Awards to be held virtually on Dec 17