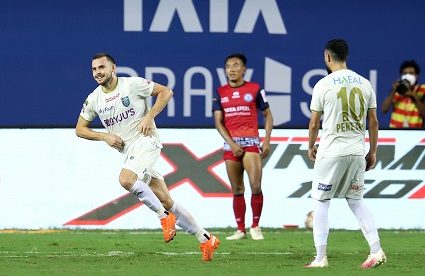 Costa Nhamoinesu gave Blasters the lead in the 22nd minute but Nerijus Vlaskis brought Jamshedpur back in the game in the 36th minute.

Jordan Murray (79′, 82′) then scored a brace in quick in the second half to give Blasters a convincing lead.

Valskis then reduced the margin in the 84th minute but it was not enough as Kibu Vicuna’s side ended the match with full points.

Earlier in the day, Odisha and Chennaiyin were unable to convert their chances and played out a goalless draw at the GMC Stadium.

The match was a cagey affair but both teams had clear chances on the goal which were undone by wayward shooting.

That Odisha had only three shots on target while Chennaiyin managed just two (of the twelve shots they took) exemplified how much both sides cancelled out each other.

Chennaiyin, the better side in terms of possession, had a couple of chances to get a winner but their forwards were unable to net them.