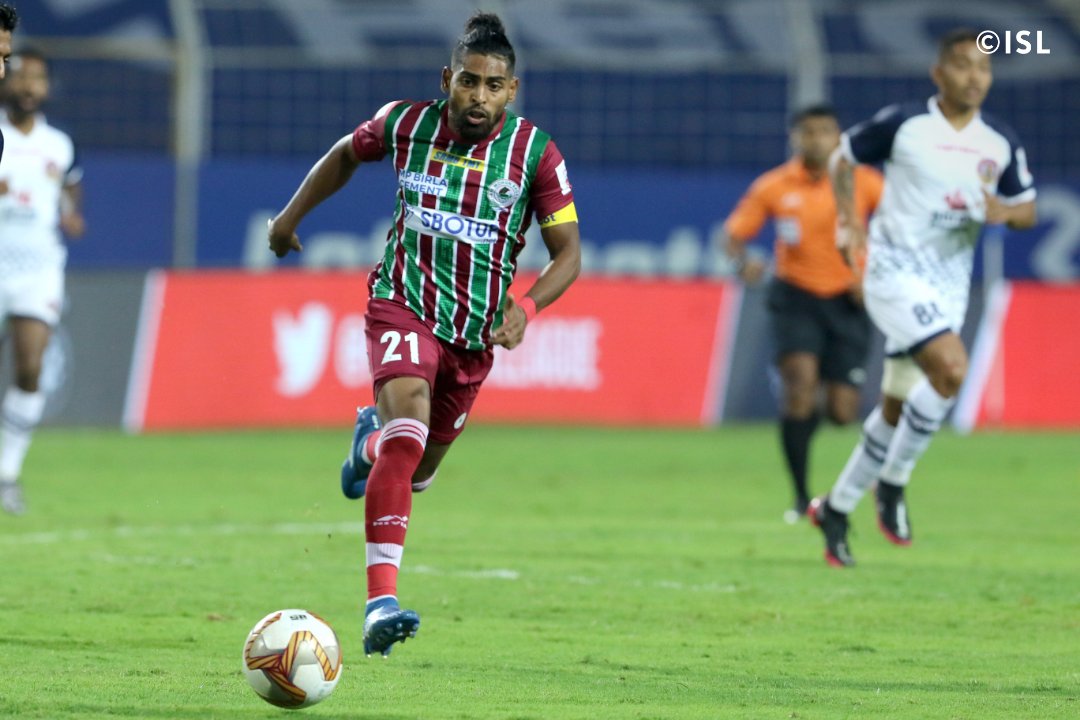 Margao: When you have a complete striker like Roy Krishna, who is as capable a scorer as a creator, it makes the job of a coach easier. All you need to do is build your team’s game around him.

ATK Mohun Bagan coach Antonio Habas has done just that. And is now reaping the rewards, doing a memorable Indian Super League (ISL) double in the storied Kolkata Derby over SC East Bengal after dominating from start to end in a 3-1 victory on Friday, having won the first leg 2-0.

Golden Boot race leader Krishna put his team ahead with his 14th strike of the tournament on 15 minutes. And then set up his strike partner David Williams (72nd minute) and substitute Javi Hernandez (89′) to drive his team to their fifth consecutive victory after a Tiri own-goal pulled SCEB level on 41 minutes.

Asian Champions League (ACL) berth-seeking ATKMB’s victory would not only be regarded as memorable but also crucial as it helped them stretch their lead at top to five points (39 from 18) over Mumbai City (34 from 17). With only pride to play for, ninth-placed SCEB (17 points from 18 games) have now been robbed of it as well.

And once Krishna was ahead of the two parallely-positioned central defenders Raju Gaikwad and Danny Fox, rounding an advancing Subrata Paul was easily achieved by the composed Fijian.

Up by a goal, Mohun Bagan players pressed further up the pitch, inside the SCEB defence. It stifled the red and golds’ attempts to pass out of danger in the midfield zone and created opportunities for Bagan.

Subasish Bose, fed by Carl McHugh from the centre of the pitch, sent crosses at every given opportunity from the left flank.

Bagan would have gone ahead as early as in the seventh minute had Krishna or Manvir Singh met a probing cross by Subasish.

Marcelinho combined with David Williams on the right channel and forced a reflex-action block from Paul. Krishna’s pace and intelligent diagonal movements kept SCEB defenders on their toes.

Most of SCEB’s offensive attempts came from set-pieces movements. It seemed Bagan were in control until fortune smiled at their opponents.

A rare misheader by Tiri, off a Raju Gikwad throw-in, creeped inside the net to pull SCEB level on 41 minutes.

Suddenly, this unforced error put ATKMB under pressure and SCEB ended the first session strongly, winning several corners and throw-ins, all sent into the box to exploit Bagan’s sudden vulnerability.

The intensity of action dropped a few notch after the break as both teams waited for the other to commit a mistake.

Yet, Bagan looked for likely to score and Krishna’s willingness to press in an and around the SCEB box drew out a mistake from Danny Fox.

The British defender’s attempted short pass was cut off by Krishna and after a swivel to unsettle Fox laid it off for Williams. The Australian’s prompt 72nd minute right-footed grounder proved too much for Paul.

The second goal tilted the balance of the match decidedly towards the green and maroons.

East Bengal were again tasked with chasing the game and apart from their creative fulcrum Bright Enobakhare no one was able to retain the ball for a considerable period of time.

Devoid of the ball and closely marked by a well-drilled Bagan side, SCEB players exhibited their frustrations only to pick up yellow cards.

And when Hernandez rose above his marker to meet Krishna’s accurate cross from the right channel to drive his header past the clutches of Paul, one knew it was all over for Robbie Fowler’s men.

The suspended Englishman could do no more than look on helplessly from the sidelines, entering the pages of history as East Bengal’s coach in their two-leg defeats  in the 100-year-strong Kolkata Derby, which made its debut in the pandemic-overshadowed ISL season.