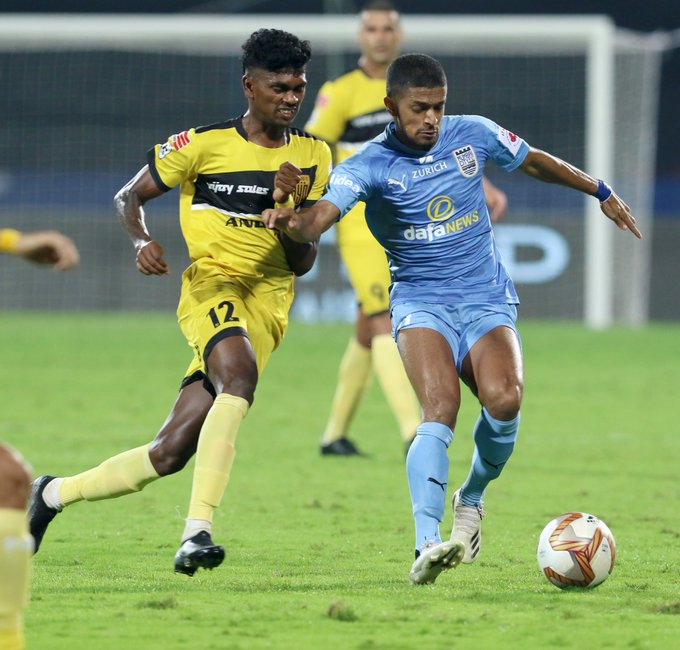 Bambolim (Goa): Hyderabad FC held leaders Mumbai City to a 0-0 draw in the Indian Super League (ISL) at the GMC Stadium on Saturday.

Hyderabad put up a solid performance in defence to restrict Mumbai from establishing their superiority and ended up threatening their table topping opposition a number of times as well.

Hyderabad pinned their opponents with their high pressing approach. They were lucky to not concede an early penalty when Raynier Fernandes was fouled after an attempted clearance from Mohammed Yasir.

The referee awarded an indirect free-kick inside the box, which Mumbai failed to capitalise on. It was an end-to-end battle in the first half, as both the keepers were called into action.

First, Laxmikant Kattimani produced a fine save to deny Adam le Fondre. Then, at the other end, Amrinder Singh kept his side alive in the game.

Aridane Santana, Joel Chianese and Liston Colaco combined together to initiate the move before Colaco tried his luck from the byline, but his near post effort was well saved by Amrinder.

The Mumbai defense has been exceptional this season and Amrinder was at his best once again to deny Chianese.

This was undeniably the best opportunity for Hyderabad to take the lead. Winning the ball in the midfield, Yasir delivered a lobbed through-ball for Chianese to send him one-on-one with the keeper. But the Australian’s shot was blocked by Amrinder.

It was more of a nervous start for Mumbai in the second half. They gave the ball away easily and nearly conceded a goal, when Amrinder, in a bid to clear a back pass, played it straight to Colaco. However, the Hyderabad striker shot wide.

Colaco continued to trouble Mumbai with his pace and shooting range, but it wasn’t enough to get the goal they were looking for. Meanwhile, for Mumbai, they were not at their best in the second session. Lobera’s men were sloppy going forward and wasted too many chances in the final third.

Mumbai had two late opportunities to get the winner. Ahmed Jahouh lobbed the ball in the box for Bartholomew Ogbeche, whose first-time shot landed on the roof.

Later, the Moroccan’s stoppage-time free-kick couldn’t get the desired connection from his teammate, as it was easily collected by Kattimani.