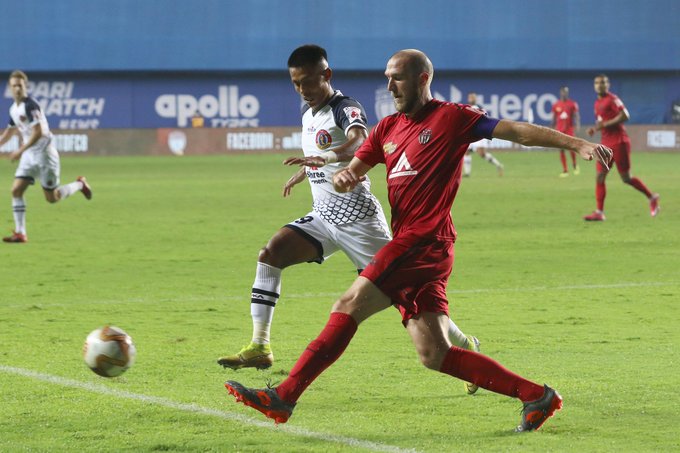 Margao: SC East Bengal’s maiden Indian Super League (ISL) campaign went from bad to worse after a 0-2 defeat to NorthEast United condemned them to a hat-trick of losses on Saturday.

SCEB now have conceded seven goals in three matches (0-2 vs ATK Mohun Bagan, 0-3 against Mumbai City and 0-2 vs NEUFC) and are yet to score even once.

The ignominious hat-trick of losses kept them at the bottom of the 11-team league with bitter foes ATK Mohun bagan at the top of the leaderboard with nine points.

NorthEast improved to the second spot after registering their second win with eight points from four games.

The Red and Golds were more mobile and determined in the initial part of the match.

Their intent should have been rewarded with a penalty in the 20th minute when Jacques Maghoma was brought down inside the area by Ashutosh Mehta.

Mehta earlier booked on the 2nd minute for desperate lunge on Maghoma, erred in a challenge to be beaten.

Maghoma went down after contact with Mehta but referee Santosh Kumar waived off the claim much to the frustration of Robbie Fowler.

More misfortune was in store for SCEB in the 33rd minute when Kwesi Appiah’s low centre from the right flank trundled off into the net after ricocheting off right back Surchandra Singh’s shin.

SCEB enjoyed majority of possession and the ball mostly moved around NEUFC’s mid half region.

But Anthony Pilkington and Maghoma lacked pace to go behind defenders.

Their long-range efforts were either blocked or somehow parried away unconvincingly by the NEUFC goalkeeper.

Legitimate shouts of two penalties, one each for both teams, were also shot down by the referee.

SCEB kept pressing but left vast open spaces behind, which were utilised by second half substitues Rochharzela as he directed VP Suhair’s cross past Debjit Majumdar.