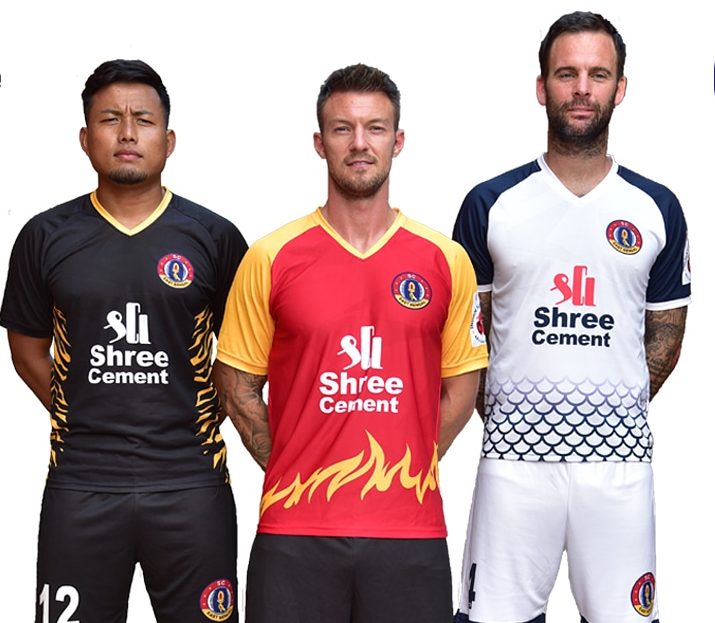 East Bengal launched their home, away and third kit for the 2020-21 ISL season.

The jerseys have been designed by Meghna Nayak, a young designer from Bengal who prefers to keep “things local”.

“While the club received numerous submissions, it was looking for a designer to present concepts that were completely original.

“Nayak’s concepts for SC East Bengal, inspired by the Flame, the ‘Ilish’ or Hilsa fish, and the Royal Bengal Tiger of the Sunderbans instantly appealed to the club,” SC East Bengal said in a release.

What better symbol to invoke than the fierceness of the beast indistinguishably associated with Bengal? The pride, energy and power that the Tiger made it the perfect symbol for our third jersey designed by Meghna Nayak.#BanglarBagh #Sunderbans #JoyEastBengal #ChhilamAchiThakbo pic.twitter.com/WhumgjbSJP

In September, East Bengal announced the arrival of Shree Cement as a new investor, helping the club tide over its financial problems and paving the way for its entry into India’s top football league.

“The jerseys look amazing. The bright red and gold home kit has traditionally been synonymous with the club and with the flaming torch adding to the firepower.

“Our away and third kits also have a lot of tradition ingrained in them which makes it even more special,” SC East Bengal head coach Robbie Fowler said.

The home kit is a stylised version of the flame in the club logo. The rendition in red and yellow continues to “signal the dynamism and firepower” of the team while adapting it to new design sensibilities.

“It had to be simple, iconic, and distinctly recognizable from afar.” said Nayak.

“I am in love with the home kit already. I think it has positive energy to it and looks good too.

I can’t wait to don the shirt and take the field,” said winger Anthony Pilkington.

Defender Danny Fox added, “The jerseys ooze a sense of pride. I am absolutely thrilled to be wearing them and I believe the fans will love them too. We want the legacy of the club to always be with us and these shirts have that.”

Striker Jeje Lalpekhlua said, “It is every footballer’s dream to don SC East Bengal colours. The jerseys look nice and well designed. They fit well too and are comfortable.”

The away jersey is blue and white in colour.