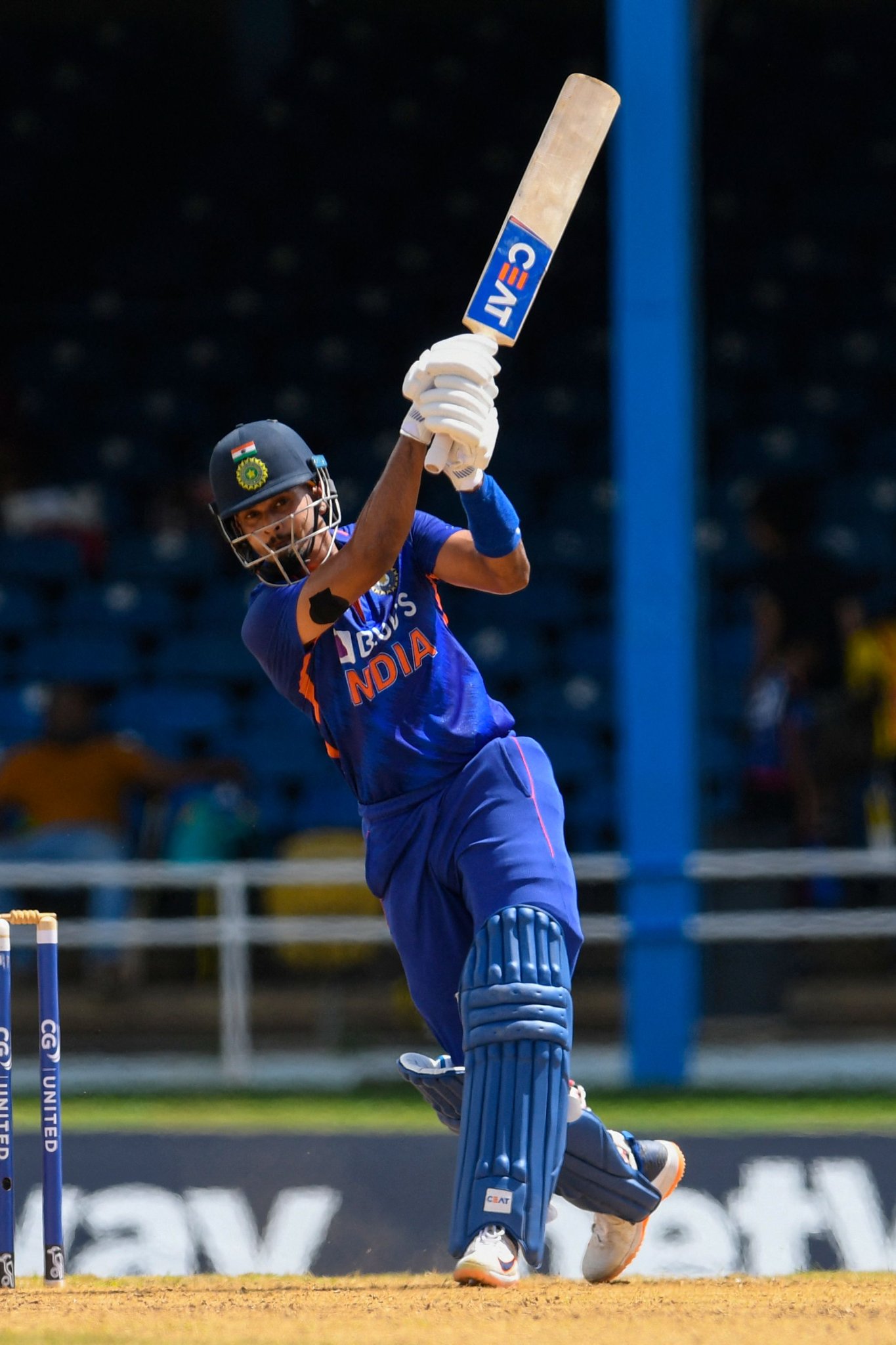 Lauderhill: Shreyas Iyer roared back to form with a stroke-filled 64 while the spinners picked up all the 10 wickets as India recorded yet another one-sided 88-run victory over West Indies to wrap up the five-match T20 International series by a comprehensive 4-1 margin here.

It was Iyer’s half-century and useful contributions from Deepak Hooda (38 off 25 balls) and stand-in skipper Hardik Pandya’s (28 off 16 balls) cameo that propelled India to 188 for 7 in 20 overs after being put in to bat.

Then, Pandya handed the new ball to Axar Patel (3-1-15-3), who quickly removed makeshift opener Jason Holder (0), Shamarah Brooks (13) and Devon Thomas (10) with three arm balls on a track where balls stopped and gripped off the surface.

West Indies were all out for 100 runs inside 16 overs as one of the most lopsided T20I bilateral series came to an end even though India won’t be complaining having ticked most of the boxes.

Once Kuldeep Yadav (4-1-12-3) caught rival skipper Nicholas Pooran (3) plumb in-front with a flighted delivery, there was no way that the West Indies could have made a comeback on a track which wasn’t easy for batting.

It started getting slower with the passage of time and despite Shimron Hetmyer’s (56 off 35 balls) resistance, it was never going to be enough as the Caribbean batting line-up never had the wherewithal to cope with the quality of Indian spinners.

Ravi Bishnoi (2.4-0-16-4) also got into the act and snapped his share of wickets as India’s spin troika varied their lengths and pace with ease to keep the Windies batters on tenterhooks.

But the day belonged to Iyer, who was able to release the pressure piling upon him with a blistering knock as the Indian team, even without its regular top-order, scored above par on a slowish track.

Stand-in skipper Hardik Pandya played a nice little cameo to beef up the score in the end with 18 runs coming off the penultimate over bowled by Jason Holder.

Due to lightning in the vicinity of the stadium, the match was halted for 15 minutes after 14.

3 overs, when India were nicely placed at 135 for three.

Having failed in the first three games and dropped from the fourth, not only did Iyer perform admirably in an unfamiliar position as an opener but also won his little ‘battle within battle’ with Deepak Hooda, who was equally impressive during his stay at the crease.

The Iyer-Hooda pair added 76 runs in only 7.1 overs and their partnership was nothing short of breathtaking with as many as four sixes (two each) hit between them apart from a flurry of fours.

The innings played a day before the Asia Cup team selection will certainly leave Iyer in a far better mind space although he is certainly going to miss out in the first XI berth when all the ‘big boys’ turn up.

The bulk of his eight fours and two sixes were all sweetly timed strokes.

Ishan Kishan (11 off 13 balls) failed to make it count and opportunities will be rare in the next two months for the pint-sized Jharkhand dasher.

Iyer teed off against Dominic Drakes with a couple of boundaries while Hooda played a cute little ramp shot over the keeper off Keemo Paul.

It was the eighth over bowled by Odean Smith where Iyer launched into the bowler with back-to-back sixes — a slash over point and a lofted drive over extra cover.

Off the first delivery by leg-spinner Hayden Walsh’s very next over, Hooda hit a picturesque inside-out six over extra cover.

However, the shot of the Indian innings was Hooda’s lofted drive over Obed McCoy’s head for a maximum.

In fact, the Baroda man would be trifle disappointed as he showed right intent while trying to deposit a Walsh half-tracker into cow corner stands but it was the string winds blowing from the opposite direction that became his undoing.

Iyer departed soon after while trying to drag a low wide full-toss from Jason Holder but in the end only managing to offer a simple return catch.