Jimmy Anderson eager to bounce back 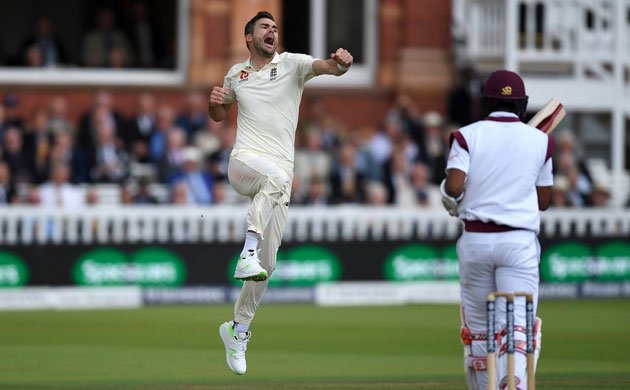 Manchester: Jimmy Anderson recently turned 38, is coming off one of his most frustrating test performances in a decade, and has a slew of young and hungry hopefuls biting at his heels for a place in the England cricket team.

So, is this the end for the country’s all-time leading wicket-taker?

“No, it’s not,” a bullish Anderson said Monday.

“I want to play as long as I possibly can. (But) if I keep bowling the way I did, the opportunity to retire will be taken out of my hands.”

Given his age, speculation about upcoming retirement is something that Anderson will have to get used to. And it has come under sharper focus following England’s three-wicket win over Pakistan in the first test of their series last week.

Anderson said he lost his rhythm and let emotions get the better of him for probably the first time in 10 years while posting figures of 1-63 and 0-34 in a frustrating match for him at Old Trafford.

“It reminded me of when I first started playing,” he said, “when you get frustrated and a little bit angry, you try to start bowling quicker and that obviously doesn’t help.”

There was even a rare no-ball for Anderson, who is fourth on the all-time list of test wicket-takers with 590 with only spin bowlers Muttiah Muralitharan, Shane Warne and Anil Kumble ahead of him.

He knew there would be “whispers” as he described it about his future at the first sign of any slow-down or regression, especially since England’s fast-bowling department is stocked with more talent than perhaps ever.

“Something I have done really well throughout my career is deal with pressure that comes with playing, whether that’s the pressure of expectation or the pressure of a match situation,” he said.

“This week, I felt I didn’t deal with it very well. That is something I need to look at, go away and work on it and try and make sure if I play in the next game or the test after that or the winter, whenever I play next, I am ready to cope with that The minute you start thinking about whispers and things like that, it can affect you.”

Anderson was rested for the second test of the three-match series England won against the West Indies last month, so being dropped for the match starting in Southampton on Thursday would be no real drama or personal crisis. The fact that the three tests against Pakistan come back to back means it is almost guaranteed he will miss out on one of them.

Anderson said he will chat about his technique with England coach Chris Silverwood a former pace bowler himself this week and also take some advice from fellow veteran fast bowler Stuart Broad.

The pair have been virtual ever-presents for England for more than a decade and have pushed each other on and off the field.

“I have never counted my chickens, never thought I was definitely playing the next game,” Anderson said. “I have always worked hard whether I was at the peak of my powers or when I first started.

“Having the attitude of working hard in practise, keeping improving and then play well in the game itself. Those are the things I try to do and that doesn’t change in the next week, the next year or the next three years, whatever it might be.”

England will be without Ben Stokes for the remainder of the series as the world’s No. 1 allrounder is returning to New Zealand for family reasons, and Anderson said it was a “big blow” to the team.

The bowler said it was another sign that cricket was more empathetic to personal issues nowadays compared to previous years, with captain Joe Root having missed the first test against the West Indies after his wife gave birth to their second child.

“I think it has definitely changed for the better,” Anderson said. “As I’ve done this week, we quite often take this game very seriously and it is our job and quite a big deal for some people.

“But there is nothing more important than family. I think it is something that certainly Joe and Chris have brought in under their leadership family comes first. And this group of players rally round each other and help if there is anything that needs help. And Ben is going through that so it is our job to try to rally round and support him the best we can and hope that things turn out OK.”

BCCI receives govt approval for IPL in UAE; Vivo’s substitute to be finalised by Aug 18: Patel

We have got government approval for IPL in UAE: Chairman Brijesh Patel